In their research note, titled aptly “Credit Metrics Bode 1ll”, Moody’s Analytics produced a rather strong warning to the corporate credit markets, a warning that investors should not ignore.

Per Moody’s: “The current business cycle upturn is in its latter stage, aggregate measures of corporate credit quality suggest. The outlook for the credit cycle is likely to deteriorate, barring improved showings by cash flows and profits, where enhanced prospects for the latter two metrics depend largely on a sufficient rejuvenation of business sales.”

In other words, unless corporate performance trends break to the upside, credit markets will push into a recessionary territory.

“Recessions materialized within 12 months of the year-long ratio of internal funds to corporate debt descending to 19.1% i n Ql -2008, Ql-2000, and Q4-1989. As derived from the Federal Reserve's Financial Accounts of the United States, or the Flow of Funds, the moving year long ratio of internal funds to corporate debt for US non-financial corporations has eased from Q2-2011's current cycle high of 25.4% to the 19.1% of Ql-2016.” 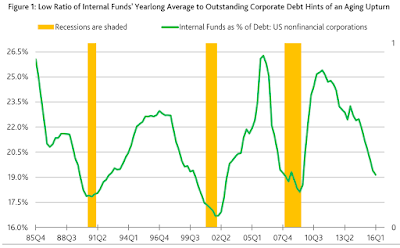 Now, observe the ratio over the current cycle: the peak around the end of 2011-start of 2012 has now been fully and firmly exhausted. Current ratios sit dangerously at 4Q 2007 and close to 1-3 quarters distance from each previous recession troughs.

The safety cushion available to the U.S. corporates when it comes to avoiding a profit recession is thin. Per Moody’s: “The prospective slide by the ratio of internal funds to corporate debt underscores how very critical rejuvenations of profits and cash flows are to the outlooks for business activity and credit quality. Getting profits up to a speed that will keep the US safely distanced from a recession has been rendered more difficult by the current pace of employment costs." 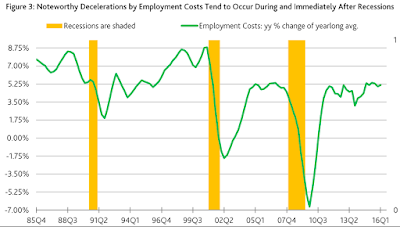 Here’s the problem. Employment costs can be cut back to improve profitability in a normal cycle. The bigger the cut back, the more cushion it provides. But in the current cycle, employment costs are subdued (do notice that this environment - of slower wages and costs inflation - is the same as in 2004-2007 period). Which means two things:

Moody’s are pretty somber on the prospect: "As inferred from the historical record, restoring profits through reduced labor costs is all but impossible without the pain of a recessionary surge in layoffs. Thus, barring a recession, employment costs should continue to expand by at least 5% annually."

That’s the proverbial the rock and the hard place, between which the credit markets are wedged, as evidenced by the recent dynamics for both Corporate Gross Value Added (the GDP contribution from the corporate sector) and the nominal GDP: 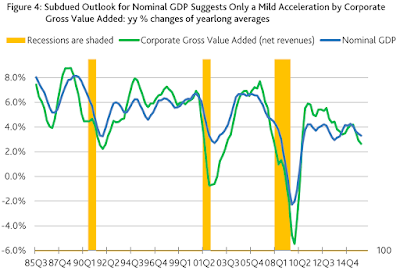 Again, the two lines show steady downward trend in corporate performance (Corporate GVA) and slight downward trend in nominal GDP. In terms of previous recessions, sharp acceleration in both trends since the end of 4Q 2014 is now long enough and strong enough to put the U.S. onto recessionary alert.

Per Moody’s: "As of early June, the Blue Chip consensus projected a 3.2% annual rise by 2016's nominal GDP that, …signals a less than 3% increase by corporate gross value added. [This]... implies a drop by 2016's profits from current production that is considerably deeper than the - 2.5% dip predicted by early June's consensus. Moreover, as inferred from the consensus forecast of a 4.4% increase by 2017's nominal GDP, net revenue growth may not be rapid enough to stabilize profits until the second-half of 2017, which may prove to be too late for the purpose of avoid ing a cyclical downturn."

In other words, there is a storm brewing in the U.S. economy and the credit markets are exhibiting stress consistent with normal pre-recessionary risks. Which is, of course, somewhat ironic, given that debt issuance is still booming, both in the USD and Euro (a new market of choice for a number of U.S. companies issuance in response to the ECB corporate debt purchasing programme):

Just as the corporate credit quality is deteriorating rapidly: 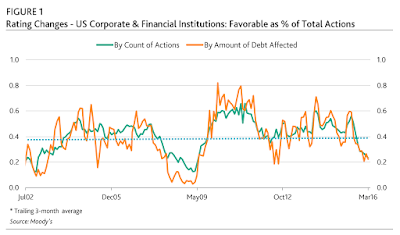 You really can’t make this up: the debt cornucopia is rolling on just as the debt market is flashing red.