Good news, folks, just in time for the Republican National Convention. The latest data, through July 2020, shows some recovery in non-farm payrolls numbers that is bound to make a feature in political chest-beating coming up next week. 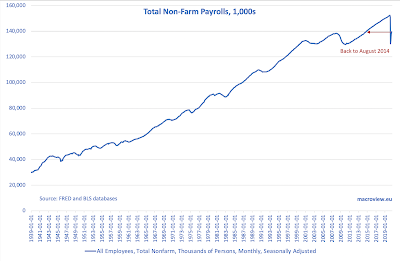 Some of these are good news. Assuming the recovery dynamics remain unchallenged by:
One side note: the above comparatives are current-to-past. These, of course, do not take into the account where the U.S. employment figures would have been, absent COVID19 pandemic crisis. Whilst estimating potential employment levels is a hazardous exercise, taking a simple exponential trend (decaying over time) from August 2018 through the latest reported period implies potential July employment level ex-COVID19 of 153,267,800. Which is not that much of a gap to the pre-crisis peak.
Another side note: if we assume that the rate of decay in jobs additions that prevailed between June and July 2020 (-17% decay) continues into the future (also a strong assumption), jobs recovery to the pre-crisis peak will take us through May 2021. For the pre-pandemic trend case, the recovery will take us into March 2022.
More data analysis of the U.S. labor markets is coming up in subsequent posts, stat tuned.
Updating my Scariest Charts for the latest data, through thee week of July 18, 2020:

First, a summary table and chart for changes in the Initial Unemployment Claims: 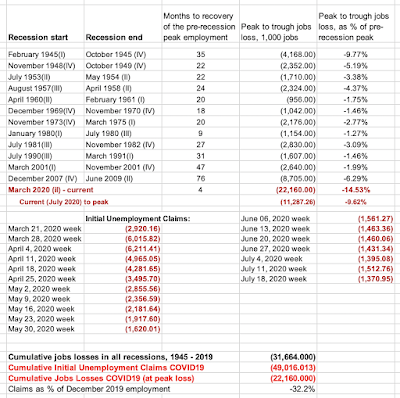 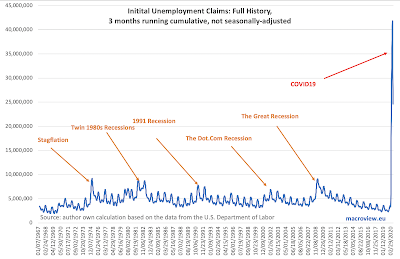 Next: Continued Unemployment Claims through the week of July 11, 2020: 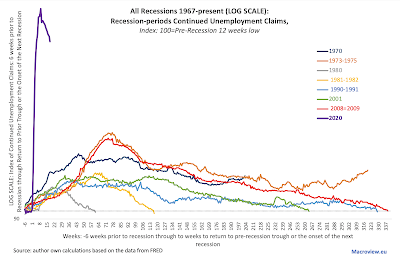 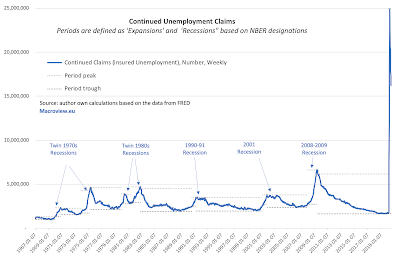 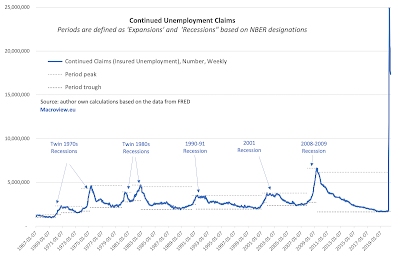 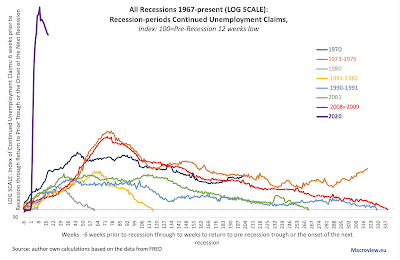 Continued unemployment claims in the week of July 4 amounted to 17,338,000 down 422,000 on prior week. A week before, the rate of decline was 1,000,000, and in 4 weeks prior to the the week of July 4, 2020, average weekly rate of decline was 711,500. Current 4 weeks average rate of decline is 737,750 driven by two weeks of > 1 million declines. The good news is that we now have 8 consecutive weeks of drops in continued unemployment claims. The bad news is that we do not know how much of the decline from the COVID19 pandemic peak is down to benefits expirations, or due to benefits cancelations due to some income being earned, with restored income being below pre-COVID19 levels. In other words, we have no clue as to whether jobs being restored are of comparable quality to jobs lost.

Next, Initial Unemployment Claims: these remain troubling too. In the week of July 11, 2020, there were 1,503,892 new initial unemployment claims filed, the highest number in 5 weeks. 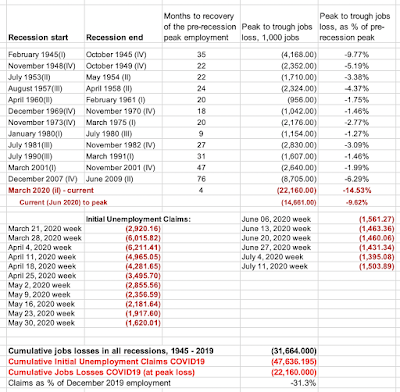 Here is the history of the Initial Unemployment Claims, smoothed out to a 3mo moving sum: 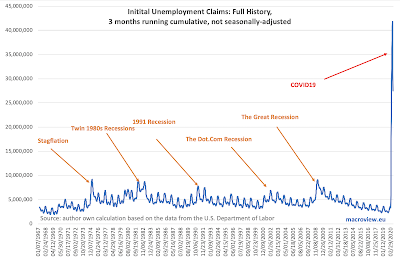 An updated employment outlook for July 2020: 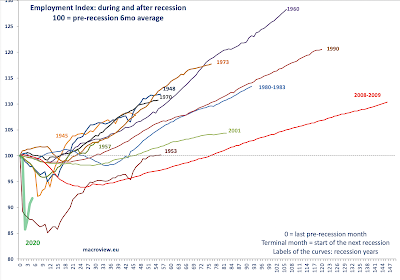 Updating my series of 'America's Scariest Charts' for the latest data releases this week.

First: continued unemployment claims for data through the week of June 27th. 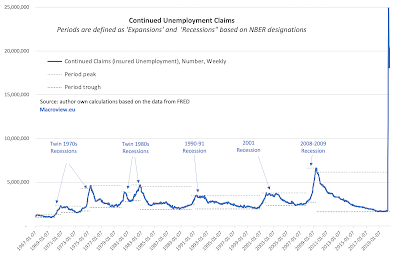 Continued unemployment claims fell from 18,760,000 in the week of June 20 to 18,062,000 in the week of June 27. Continued claims are now down 6,850,000 from their pandemic-period peak, which implies a decline of 978,571 per week since the peak. Based on the last two weeks' average weekly decline, it will take around 28 weeks to return continued unemployment claims to the pre-COVID19 levels. 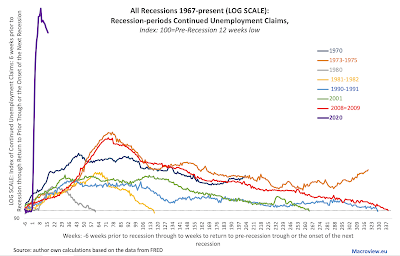 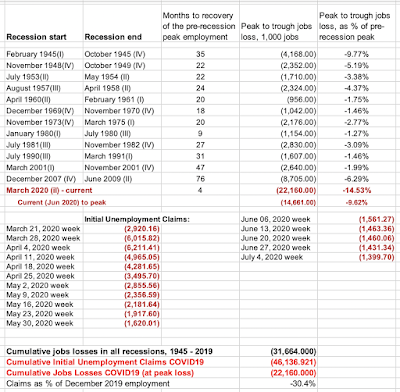 Updated non-farm payrolls forecast for July 2020, based on June data for payrolls and the first data for July on changes in unemployment claims: 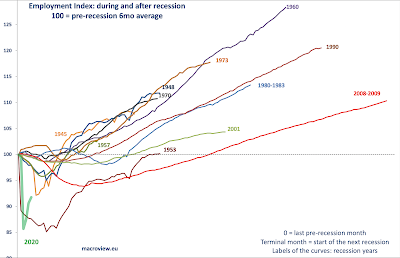 Average duration of unemployment is still completely swamped by the force and speed of the COVID19 onset, but is rising toward recession-consistent above-average territory: 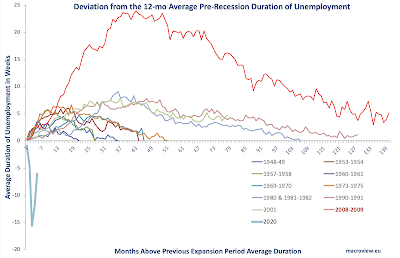 Now, with two months of some jobs recovery, it is worth looking at (2) above. So here they are: continued unemployment claims charts:
Let us start with history: 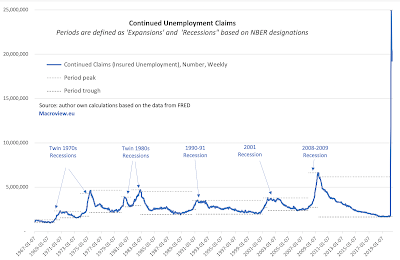 There is no scaling in the above chart, just the numbers of people claiming unemployment insurance on continued basis. Which is telling: in recessions, these rise; in recoveries they fall. You can see that the lowest unemployment claims tend to happen some months before the onset of the subsequent recession. And recoveries take long. Of course, in the 1970s, there were fewer people in the labour force and, therefore, the absolute numbers of the unemployed were also lower.


First, let us do this for all recessions since 1967 (when the data starts) through the end of 2019 - ignoring for now the COVID19 period. 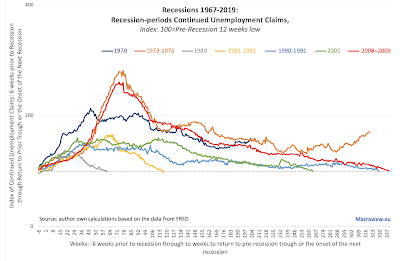 Lots of interesting stuff in the above.


And so on... but now, time to bring in the COVID19 pandemic. Let us start by just plotting it with the rest of the data. Boom! 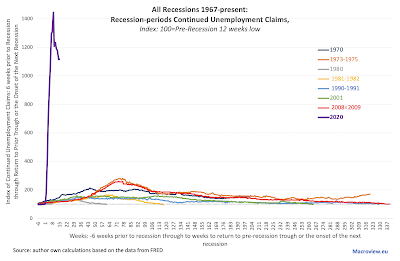 The COVID19 pandemic made so many people claim unemployment insurance - on continued basis, not just one-off first time claims that anyone can file - that you can no longer meaningfully consider the rest of the recessions in comparison. In data analysis, we say that COVID19 pandemic is an influential outlier - it distorts our analysis of all other recessions. In this case, it is useful to use logarithmic scale to visualize the data. So here it is: 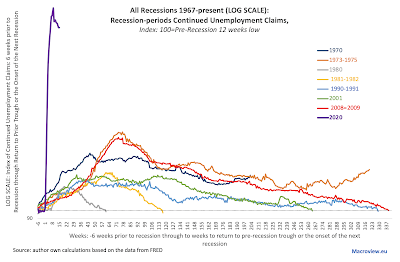 Even with log-transform, as above, the COVID19 crisis is off-the charts! No one has ever seen anything like this. Which we know.
The recovery from the pandemic has been sharp as well (steeper slope than in other recessions), but both charts above highlight the fact that whilst the U.S. economy is restoring some jobs during May-June re-opening period, the process of restoring these jobs is slow. Unlike what you hear from the White House and the Republican Party and its media, we are not in a 'tremendous recovery' and there is no 'roaring growth'. There is a mountain of pain that is being chipped away. At a current rate of 'chipping away', it can take the jobs markets some 10 months to come back to the pre-COVID19 'normal'. But that assumes that there will be no permanent or long-term jobs losses from the pandemic and the aftermath of the pandemic. It also assumes that the second wave of COVID19 infections that the U.S. is currently experiencing is not going to lead to such losses of jobs, and will not result in return to April-May levels of restrictions, and will not trigger a third wave of pandemic in Autumn. All three 'ands' must hold to get to that 10 months recovery.

Stay tuned, I will be updating this chart as we go.