Oscar Martinez, Efren Lemus, Carlos Martinez, and Deborah Sontag have an excellent profile of El Salvador's gangs in the New York Times with Killers on a Shoestring: Inside the Gangs of El Salvador.

In collaboration with The New York Times, El Faro, a digital newspaper based in San Salvador, sought to pierce the secrecy surrounding the finances of the gangs that terrorize El Salvador, which is experiencing a level of deadly violence unparalleled outside war zones: 103 homicides per 100,000 residents last year, compared with five in the United States.

With an estimated 60,000 members in a country of 6.5 million people, the gangs hold power disproportionate to their numbers. They maintain a menacing presence in 247 of 262 municipalities. They extort about 70 percent of businesses. They dislodge entire communities from their homes, and help propel thousands of Salvadorans to undertake dangerous journeys to the United States. Their violence costs El Salvador $4 billion a year, according to a study by the country’s Central Reserve Bank.

And yet, the reporting determined, MS-13 and its rival street gangs in El Salvador are not sophisticated transnational criminal enterprises. They do not begin to belong in the same financial league with the billion-dollar Mexican, Japanese and Russian syndicates with which they are grouped. If they are mafias, they are mafias of the poor. El Salvador has been brought to its knees by an army of flies.

MS-13’s annual revenue appears to be about $31.2 million. That estimate is based on information in the 1,355-page file of Operation Check, to which El Faro got exclusive access. Wiretapped conversations reveal that the gang’s national leadership ordered its 49 “programs,” or chapters, to turn over all the money earned in a single, typical week, which happened to be in April. It collected $600,852.

It sounds like a lot of money. But if divided equitably among the estimated 40,000 members of MS-13, each gang member would earn $15 a week and about $65 a month. That is half the minimum wage of an agricultural day laborer.

The entire article is well worth your time. A few things jump out. First, the government still can't find the appropriate mix of tactics through which to approach gang violence. The most recent one seems to be direct confrontation with the gangs. As a result, many gang members have died in questionable confrontations with the authorities.

Prior to this head on policy, and somewhat overlapping temporally, was a government policy to drive a wedge between foot soldiers and leaders. Police communiques strategically emphasized how gang leaders were living lives of luxury while those on the street were living in squalor.

In the first place, that does not appear to have been true. Considering the costs of satisfying 60,000 members and their families (perhaps 600,000 in total), Salvadoran gangs did not make that much money. Most gang leaders are in prison and there is little evidence that those on the outside were living the life.

Whether true or not, this message would have needed to have been delivered more than once or twice to have been effective. They would have needed to have made this a consistent communications policy over months, if not years, to really have any effect. Finally, I'm not sure that driving a wedge between leadership and foot soldiers was going to lead to any desirable final outcome. How then does the government respond to the greater decentralization of gang power.

While the authors throw some water on the characterization of these gangs as criminal transnational organizations, I would have liked to have seen some greater discussion of the links between gang members in the US and in El Salvador. There is something there even if it is not the strong links portrayed by US authorities.

Just over one year ago, El Salvador and the international community announced a new, more comprehensive policy towards security, Plan Seguro. Has Plan Seguro been effective at all? I'm not sure that it has, it's only been one year, but what about other programs designed to make the poor of El Salvador safe from gangs? As seen in the readings, poor young kids join the gangs because they have few choices.

The article is well worth your time this morning.
Dinorah Azpuru has a post at The Monkey Cage on To understand Donald Trump’s law-and-order appeal, look south of the border. How do Trump supporters compare to those of Rios Montt, Portillo, and Perez Molina?

Donald Trump’s acceptance speech at the Republican Convention focused on fear as the cornerstone of his appeal to voters. That speech, and many of Trump’s speeches, evoke the caudillos, or strongmen, who have been a staple of Latin American politics for centuries. The length of Trump’s acceptance speech, the yelling, the appeals to nationalism, and in particular the personalist tone of his message (“I alone can fix it”), parallel the speeches of populists such as Hugo Chávez in Venezuela and Rafael Correa in Ecuador.

Indeed, Trump’s populist style has been compared to that of those leftist leaders on several occasions. But Trump’s law-and-order approach to campaigning is also reminiscent of right-wing leaders such as Alberto Fujimori in Peru and Efraín Ríos Montt in Guatemala.

Two recent Guatemalan elections may help shed light on Trump’s appeal. While some Latin American leaders have focused on economic populism and anti-establishment rhetoric, leaders in Guatemala have, like Trump, emphasized law and order.

And to think that Manuel Baldizon was the soft on crime candidate in 2011. He only called for the reinstatement of the death penalty and televised executions.

As the war continues to rage, the fight against the Mara Salvatrucha (MS-13) and Barrio 18 gangs has often taken center stage. However, the security landscape in El Salvador is more complex than a battle between gangs and security forces. There are struggles between the gangs, within the gangs, conflicts between all armed actors and citizens, and some violence due to transnational drug trafficking. In this complicated, very bloody fight, violence has become a daily occurrence, forcing entire neighborhoods to leave their homes and making it nearly impossible for many children to go to school or for adults to make a living.

Post 2 on El Salvador's Security Policy is Increasing Extrajudicial Killings and Abuse went up on Friday. You can follow the rest of the series here. They're not pretty, nor should they be.
Vice News ran a recent five part series on the "Gangs of El Salvador." You can watch the entire series embedded below. It's a little over an hour long.

I'll get to it someday. Maybe during the Central America class I am teaching in the spring.

Update - I deleted the embedded video because it kept running on auto-play no matter what post one was trying to read on the site. You can see the video in its entirety here. 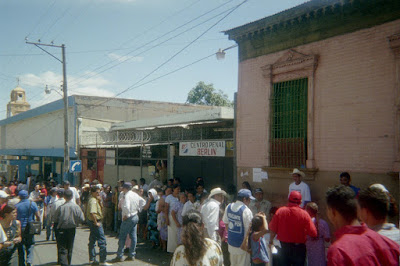 El Faro's Roberto Valencia recently investigated how one city in El Salvador seems have avoided the insecurity problems that prevail in much of the rest of the country with his reporting into Berlin in the department of Usulutan. Insight Crime translated the story (the PanAmPost picked up on it as well).

"Small stuff happens, but you could say that it is peaceful," says Salvador Peña, a business administrator in Berlin for the last four years. He knows of businesses that have been extorted, but in Berlin these abuses are generally reported to the authorities. "All the inhabitants are watchful, for the most part we all know each other, and the police act rapidly," he says.

Peña is convincing when he denies the presence of gangs, but we must not be too naive: if there was a threat put forth by the gangs, no one would trust a journalist with his tape recorder on.

Extortion is the principal source of income for Salvadoran gangs, but Berlin appears to be liberated territory. There have been some cases of established cliques from neighboring municipalities that make threats, or even criminals that try to pass themselves off as gang members, but it appears the extortion payment system doesn't exist here.

As I said: Berlin doesn't seem like El Salvador.

Preventing the emergence of gangs is obviously different from retaking entire communities that have been overrun by gangs, but there do seem to be lessons nonetheless. Strong community ties, investments in education and after school activities, and good policing can be pretty effective.
Here are some photos of Berlin from when I volunteered as an election observer in 2004. 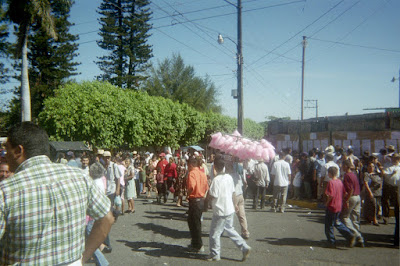 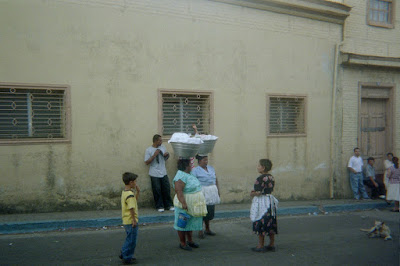 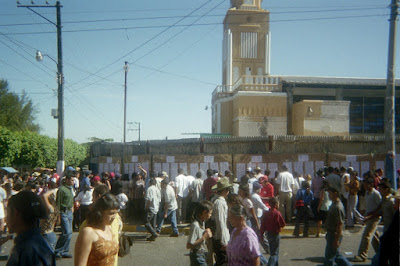 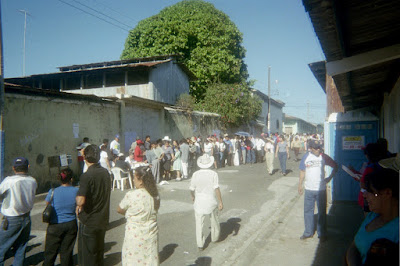 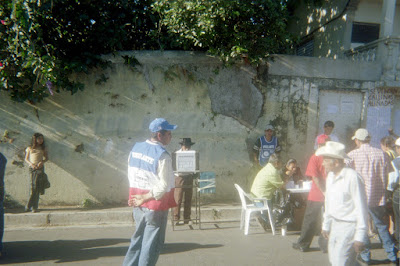 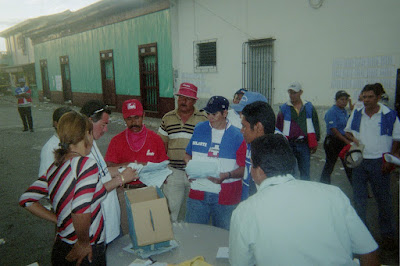 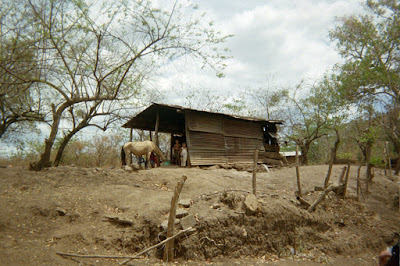 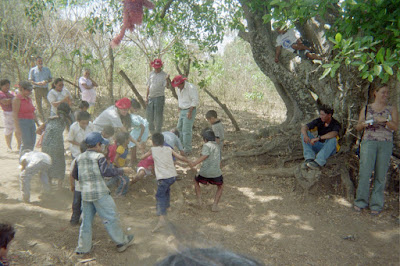