After starting at its all time record high, the S&P 500 (Index: SPX) dropped into bear territory in 2022, spending much of the time during the year bouncing around the 20% decline threshold that defines bear territory. The last two weeks of the year were no different, with the index closing out 2022 right at the bear territory threshold.

The final update to the alternative futures chart for 2022-Q4 shows the index experienced one more Lévy flight event in 2022, with investors shifting their forward looking focus from 2023-Q1 outward to the more distant future quarter of 2023-Q2. 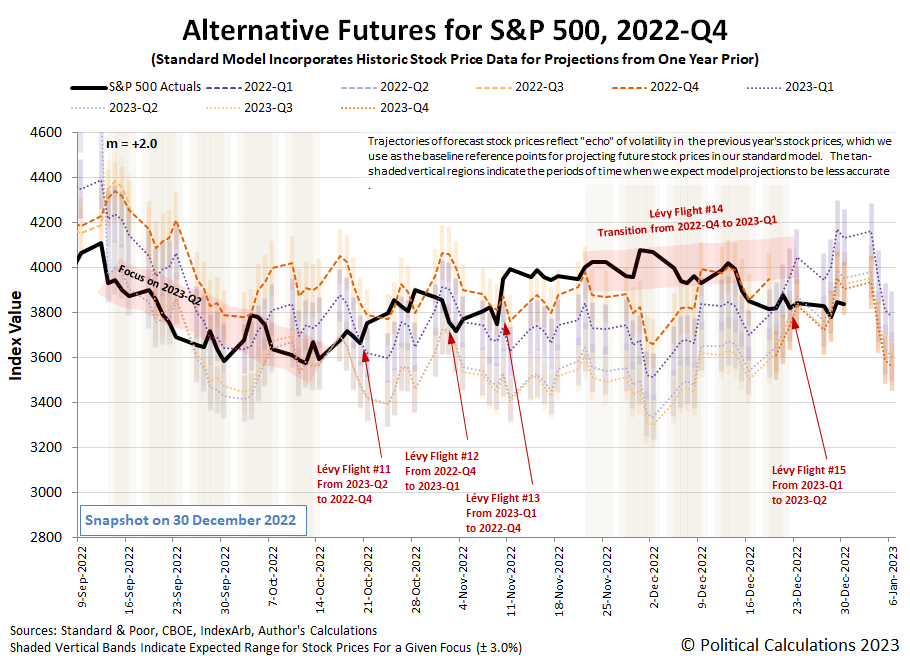 Given the closeness of the dividend futures-based model's projections for 2023-Q2, 2023-Q3, and 2023-Q4, it's possible investors have shifted their attention to more distant future quarters. But with the actual trajectory of the S&P 500 still within the range of values we would expect it to be for investors focusing on 2023-Q2, we cannot yet rule that possibility out.

Not that it would take long to get that picture sorted out. The market moving headlines of the last two weeks point to the expected timing of the peak of the Fed's series of rate hikes (2023-Q2) and the increasingly expected arrival of recession in the second half of 2023 as the factors that will set how far forward in time investors set their time horizons. Here are the headlines:

The Atlanta Fed's GDPNow tool's latest projection for real GDP growth in the fourth quarter of 2022 spiked higher to +3.7% from the +2.8% estimate of two weeks earlier. The "Blue Chip consensus" continues to project just over 1% real economic growth for the current quarter of 2022-Q4. The BEA will issue its first estimate of 2022-Q4's GDP later this month, on 26 January 2023, which will help determine which of set of nowcasts is more wrong.

We'll present our first look at the alternative futures for 2023-Q1 in the next edition of the S&P 500 chaos series. 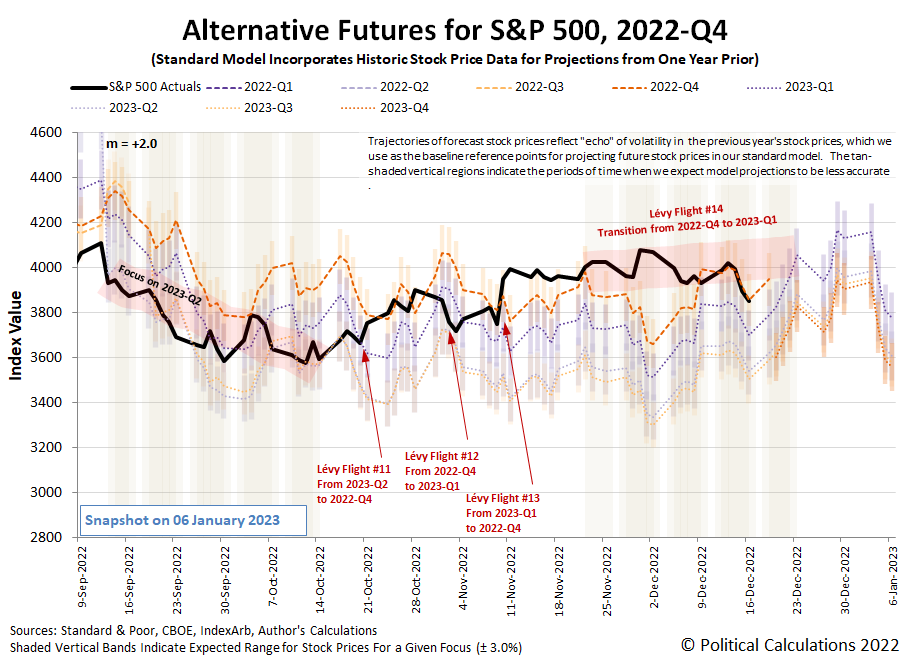 Before we go any further, let's recap a short bit of our analysis from last week, which will help explain what's going on in the updated portion of the alternative futures chart:

If investors focus predominantly on 2023-Q1, the trajectory of the S&P 500 will remain within the redzone forecast range. If investors shift a larger portion of their attention further forward in time to 2023-Q2, the trajectory will drop below this indicated range.

Here's what changed to prompt that shift in how far forward investors are looking. After the Fed's expected half point rate hike on 14 December 2022, news indicating developing weakness for the U.S. economy reshaped investors expectations of how the Fed will be changing interest rates in 2023. Those changes are captured by the CME Group's FedWatch Tool, which dialed back its forecast for the Fed's next rate hike from a half point to just a quarter point at its 1 February (2023-Q1) meeting. The FedWatch tool then sees just one more quarter point rate hike in March (2023-Q1), where the Federal Funds Rate would top out in the 4.75-5.00% range, below what they expected just a week earlier. Looking further forward, developing expectations for a recession in 2023 have the FedWatch tool projecting two quarter point rate cuts, the first in September (2023-Q3) and the second in December (2023-Q4).

Based on this information, through Friday, 16 December 2022, we would describe the level of the S&P 500 as consistent with investors splitting their attention between 2023-Q1 and 2023-Q3. That level is coincidentally near the middle of where we might sketch a new redzone forecast range on the chart to indicate where the S&P 500 would be if investors were closely focused on 2023-Q2.

Here are the week's market-moving headlines:

This is the last post in our S&P 500 chaos series for 2022. We'll be back in the first week of Janaury 2023 to recap the final two trading weeks of 2022, where the big question we have going into those final weeks is whether there will be one or two more Lévy flight events to end the volatile year of trading.

The index' trajectory swung to the bottom edge of the latest redzone forecast range on the alternative futures chart and bounced along it during the week. This range is based on the assumption investors would be transitioning their forward-looking focus from 2022-Q4 to 2023-Q1 in the period from 22 November to 23 December 2022. 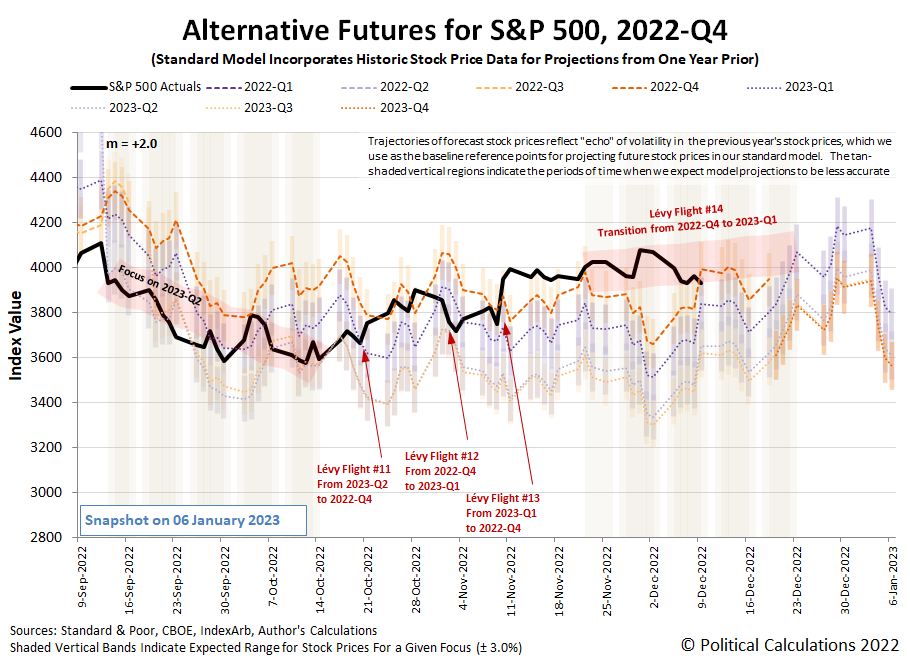 The market environment continues to force investors to pay lots of attention to how the Federal Reserve will be changing interest rates in the weeks and months ahead. A half point rate hike is anticipated to be set when the Fed's Federal Open Market Committee completes its upcoming two-day meeting on 14 December 2022, after which, we anticipate investors will fully shift to the more distant future quarters of either 2023-Q1 or 2023-Q2.

If investors focus predominantly on 2023-Q1, the trajectory of the S&P 500 will remain within the redzone forecast range. If investors shift a larger portion of their attention further forward in time to 2023-Q2, the trajectory will drop below this indicated range.

Which outcome happens will depend on what new information becomes available during the week. Speaking of which, here are the market-moving headlines we found in the past week's newstreams.

The CME Group's FedWatch Tool maintained its projection of a half point rate hike at the Fed's upcoming 14 December (2022-Q4) meeting, but now anticipates another half point rate hike at its 1 February (2023-Q1). The Federal Funds Rate would then be boosted by a quarter point to a peak of 5.00-5.25% in May (2023-Q2). Looking further forward, the FedWatch tool now projects a quarter point rate cuts in 2023 as early as July (2023-Q3) followed by a second in December (2023-Q4) in response to expected recessionary conditions. A growing likelihood for a rate cut in 2023-Q2 is what we think would draw investors' forward-looking focus to this quarter, which would send the S&P 500 lower.

The Atlanta Fed's GDPNow tool's projection for real GDP growth in 2022-Q4 rose to 3.2% from last week's +2.8% estimate. The "Blue Chip consensus" has also been updated to anticipate slightly over 1% real growth for the current quarter of 2022-Q4.

The level of the S&P 500 (Index: SPX) continues to react to news affecting investor expectations of how the Fed will be setting interest rates in upcoming months. The index rose 1.1% from the close of trading during the previous week to close the week ending 2 December 2022 at 4,071.70.

During the week, evidence supporting the hypothesis that investors are in the process of transitioning their forward-looking attention from the current quarter of 2022-Q4 to the upcoming quarter of 2023-Q1 continued to build. The latest update to the alternative futures chart shows that hypothesis as the new redzone forecast range spanning the month-long period from 22 November through 22 December 2022. 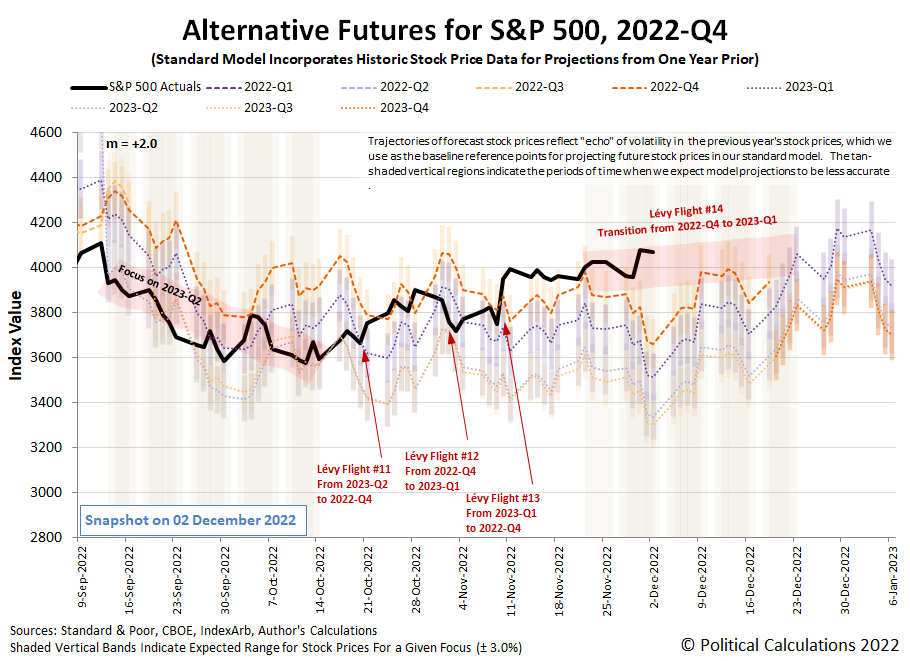 Investors are focused on this period because they are paying very close attention to statements by Federal Reserve officials about how they intend to set the level of the Federal Funds Rate when they meet in December 2022 and during the first quarter of 2023. This period is expected to contain the top for this basic interest rate as the Fed's current series of rate hikes comes to an end, now expected at the one year mark after they began.

The market moving headlines of the week that was emphasizes the outsize role the Fed is having on the trajectory of the U.S. stock market. Pay close attention to the news of 30 November 2022, since this news allowed the S&P 500 to end the month with a bang.

The CME Group's FedWatch Tool continues to project a half point rate hikes at the Fed's upcoming December (2022-Q4) meeting, but now anticipates quarter point rate hikes at its February and March 2023 (2023-Q1) meetings. The Federal Funds Rate is still projected to peak at a target range of 5.00-5.25%. Looking further forward, the FedWatch tool now anticipates two quarter point rate cuts in 2023, coming in November and December (2023-Q4) as the Fed swings into reverse because of expected recessionary conditions in the U.S. economy.

The Atlanta Fed's GDPNow tool's projection for real GDP growth in 2022-Q4 rose plunged to 2.8% from last week's +4.3% estimate. That plunge shrank the gap between its current projection and the so-called "Blue Chip consensus", which still predicts near zero growth during the current quarter of 2022-Q4.

The newly updated alternative futures chart shows the index' trajectory as running to the high side of the range associated with investors focusing their attention on the current quarter of 2022-Q4. We'll soon be entering a period where the echoes of past volatility will skew the dividend futures' model's raw projections. Looking past that period however, we see the projections for 2023-Q1 are rising to a similar level as today's stock prices. That opens up the possibility that when investors act to shift their forward-looking focus away from the current quarter, which they'll be forced to do in the next several weeks, stock prices may not change much from their current level.

Until, that is, investors have reason to look past 2023-Q1 to consider what comes after. As we've seen over the past several weeks, the top two drivers affecting how far into the future investors are looking is what the Fed will do with interest rates and when it will do them.

We'll cover what changes they're expecting and when they're expecting them at the end, but for now, here are the market moving headlines of the week to provide the context in which investors made decisions during the holiday-shortened, slow trading week that was.

The CME Group's FedWatch Tool continues to project a half point rate hikes at the Fed's upcoming December (2022-Q4) and February 2023 (2023-Q1) meetings. Followed by a quarter point rate hike in March (2023-Q1), the Federal Funds Rate is still projected to peak at a target range of 5.00-5.25%. Looking further forward, the FedWatch tool now anticipates a quarter point rate cut in July (2023-Q3) as the Fed is forced to go into reverse by developing recessionary conditions in the U.S. economy.

The Atlanta Fed's GDPNow tool's projection for real GDP growth in 2022-Q4 rose slightly to +4.3% from last week's +4.2% estimate. There continues to be a large gap between its current projection and the so-called "Blue Chip consensus" that predicts near zero growth in 2022-Q4.