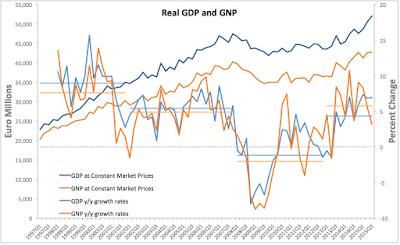 Per chart above, both GDP and GNP continue on the upward trend, albeit at different rates of growth. This divergence is now translating into widening (once again) GDP/GNP gap. In 2Q 2015, the GDP/GNP gap stood at 18.9%. In 3Q 2015 the gap widened to 21.65% - the largest since 1Q 2012 and well above the average of 17.8% for the period from 1Q 2013 through 3Q 2015. This gap used to reflect most of the over-statement of actual economic activity due to the MNCs trading in the Irish economy, but it no longer does, as new accounting standards now push up (superficially) or investment (via R&D reclassification in recent years, and through the upcoming ‘Knowledge Development Box’) and as MNCs continue to alter their pattern of profit flows through Ireland.

The latter aspect is reflected in rising volatility of Net Factor Income Flows which rose to 17.8% as a share of GDP in 3Q 2015, the highest level since 1Q 2012. 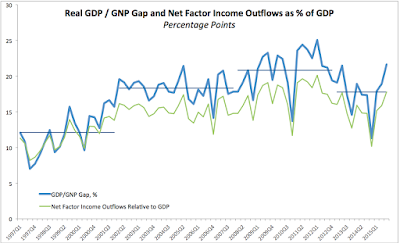 Incidentally, Net Factor Income for Rest of the World stood at a whooping EUR9.264 billion in 3Q 2015 - the highest level on record. Over nine months through September, MNCs-driven outflows of payments from Ireland exceeded inflows of payments into Ireland by a massive EUR24.67 billion which is 15.2 percent higher than for the same period of 2014.

Here is a comparative to ponder: in the first three quarters of 2015, GNP rose EUR6.69 billion on the same period of 2014, while net outflows of factor payments out of Ireland rose EUR3.25 billion, almost 1/3 of the increase in GDP and 1/5 of the increase in GNP.


Stay tuned for quarterly growth rates analysis coming up next.