Every three months, we take a snapshot of the expectations for future earnings in the S&P 500 (Index: SPX) at approximately the midpoint of the current quarter, shortly after most U.S. firms have announced their previous quarter's earnings.

The latest forecast for S&P 500 earnings through the end of 2020 suggests a less deep earnings recession than the forecast from the Summer 2020 snapshot, indicated a better-than-previously-expected bottom for the Coronavirus Recession. At the same time, S&P continues to project a robust recovery for earnings in 2021, although not as strong as it did three months ago. 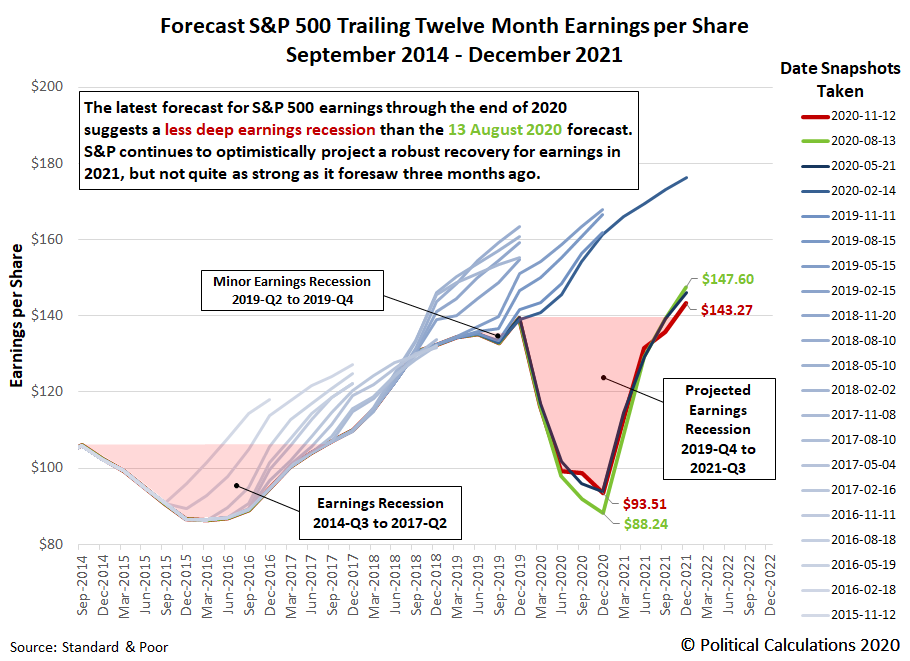 The chart shows two previous earnings recessions for the S&P 500, going back to 2014. As you can see from the historic earnings per share data shown in the chart, Standard & Poor has a history of making optimistic projections, which are often revised downward. Changes in S&P's projections for 2021 will be something to watch as we get into 2021, especially with the prospects for a global double-dip recession. 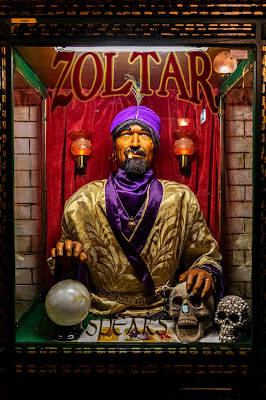 We have been experimenting with using a company's market capitalization and its expected forward year aggregate dividends to forecast the future for both.

Why these measures, instead of say the company's share price and its expected future dividends per share?

Focusing on a company's market cap and its aggregate dividend payouts could potentially remove the effects of the artificial impact by share buybacks, providing a clearer picture of whether a company itself might be either over- or under-valued in the current market environment.

In our experiments, we've been working with General Electric (NYSE: GE) because the company has been forced to execute dividend cuts that would be expected to reduce its share prices, even as it has been actively engaged in share buybacks during much of the past 10-11 years. The chart below shows the results of our initial cut at using GE's market cap combined with changes in the expectations for the company's future aggregate dividends to forecast where both these measures might end up, along with the data of where it did end up. 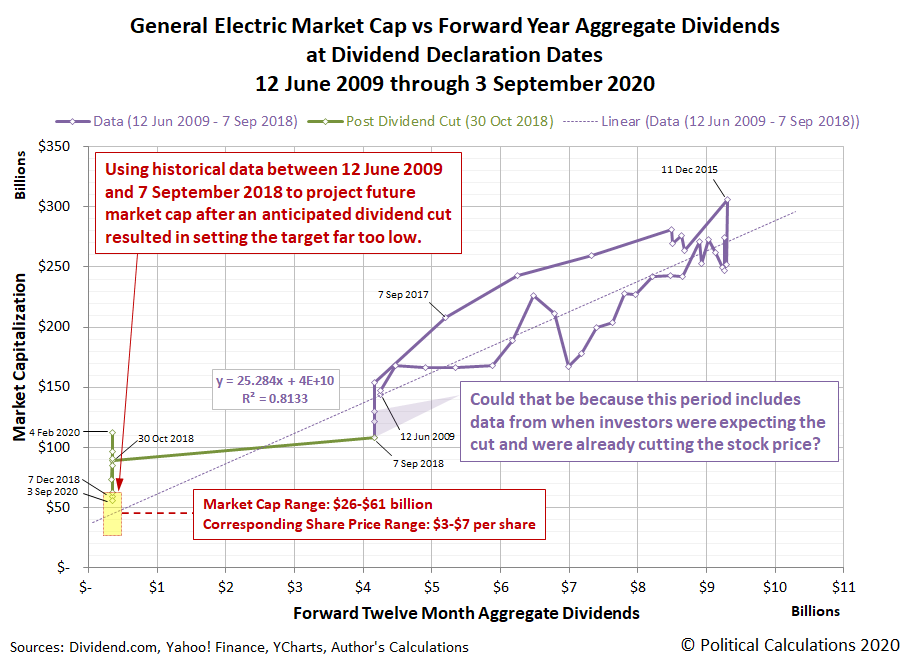 Using the historic relationship between GE' market cap and its aggregate forward year dividends, we found we could easily project where these measures might go once GE implemented a drastic dividend cut, which it did on 30 September 2018. But as you can see from this chart, this method set the target range far too low.

We next opted to tweak this approach and project the future for GE's market cap based only on the portion of the historical data where GE's 30 September 2018 dividend cut was not yet under consideration. The results of that exericise are shown in the next chart. 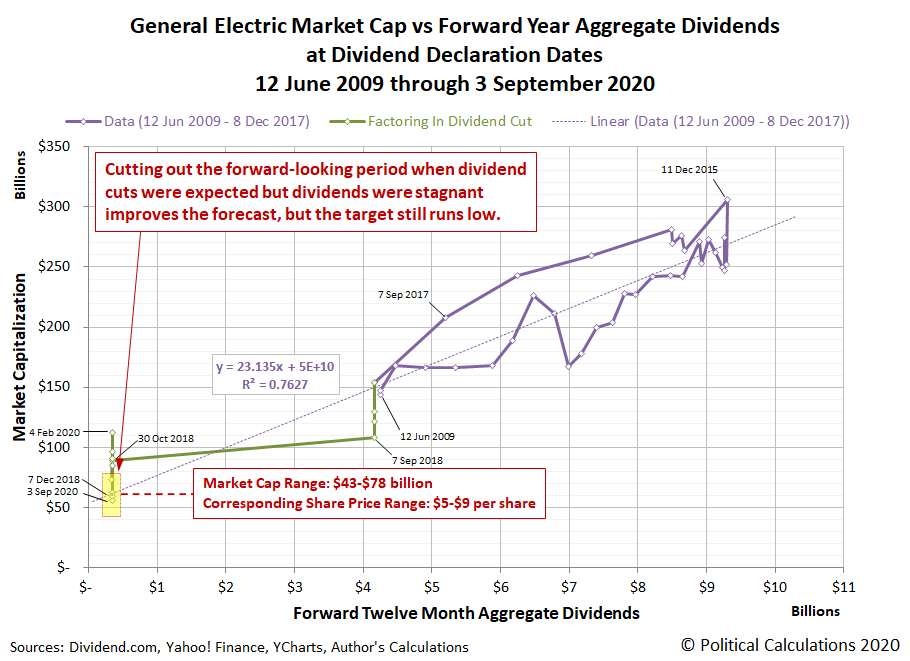 Here, we found that by eliminating the portion of the historical data that didn't include any of the expectations for GE's last dividend cut, we could improve our results. But not by very much, as it turns out. The projected target range is still set too low compared with where GE's market cap has ranged since its 30 September 2018 dividend cut.

We wondered what might happen if we drew a couple of parallel lines to the main trend line to correspond with the relative position of the highest and lowest market caps that GE has recorded since June 2009. The third chart below shows that result: 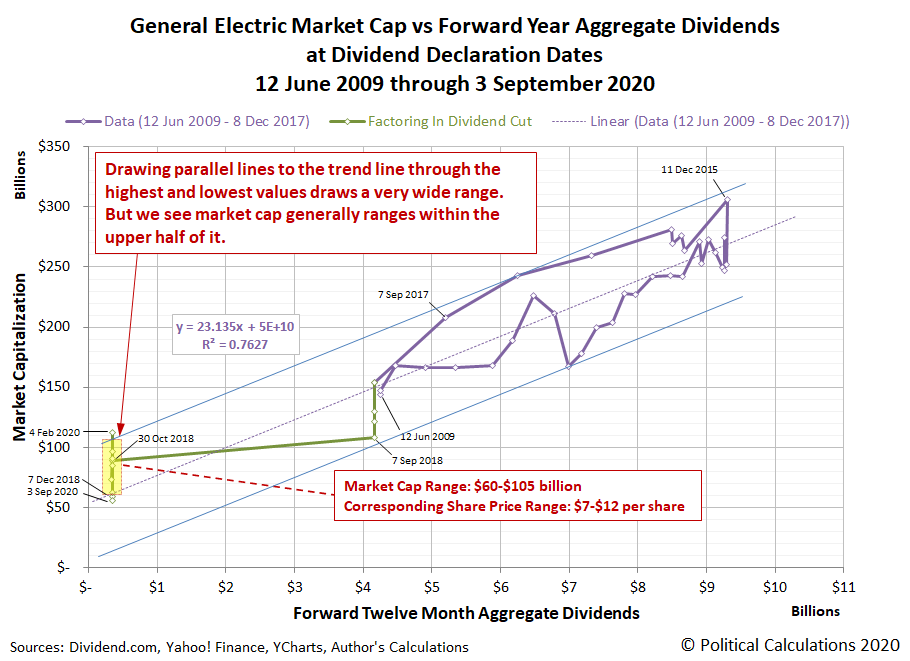 That latter results suggests we may be onto something better than throwing random darts at a moving dartboard, so we're going to try this method out with a different stock - one that may be acting to cut its dividend in the relatively near future, like GE back in 2018. We'll present the results of that rough experiment in upcoming weeks.

Every three months, we take a snapshot of the expectations for future earnings in the S&P 500 (Index: SPX) at approximately the midpoint of the current quarter, shortly after most U.S. firms have announced their previous quarter's earnings.

The latest forecast for S&P 500 earnings through the end of 2020 suggests a slightly deeper earnings recession than the forecast from the Spring 2020 snapshot, showing the continuing drag from the Coronavirus Recession. At the same time, S&P continues to optimistically project a robust recovery for earnings in 2021. 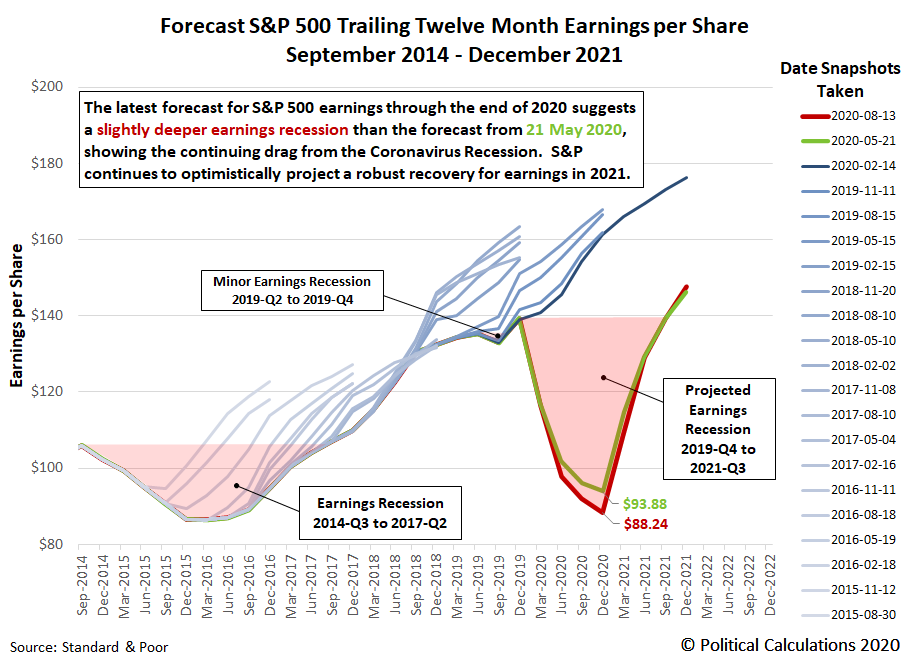 The earnings forecast data suggests that the last three months of the coronavirus recession in the United States has been much less damaging to the earnings prospects of the firms that make up the S&P 500 index than its first three months. This snapshot captures the positive development of the earnings recession getting worse at a much slower pace, which is a precursor to it bottoming out and beginning to recover.

As you can see in the historical expectations for the S&P 500's earnings per share that are shown in the chart, S&P has a history of making optimistic projections. Changes in S&P's projections for 2021 will be something to watch in the next few months.

We thought it might be fun to take a quick look into the expected future for the S&P 500's quarterly dividends per share. The following chart shows what we saw when we looked into the CME Group's crystal ball for the S&P 500's dividend futures. 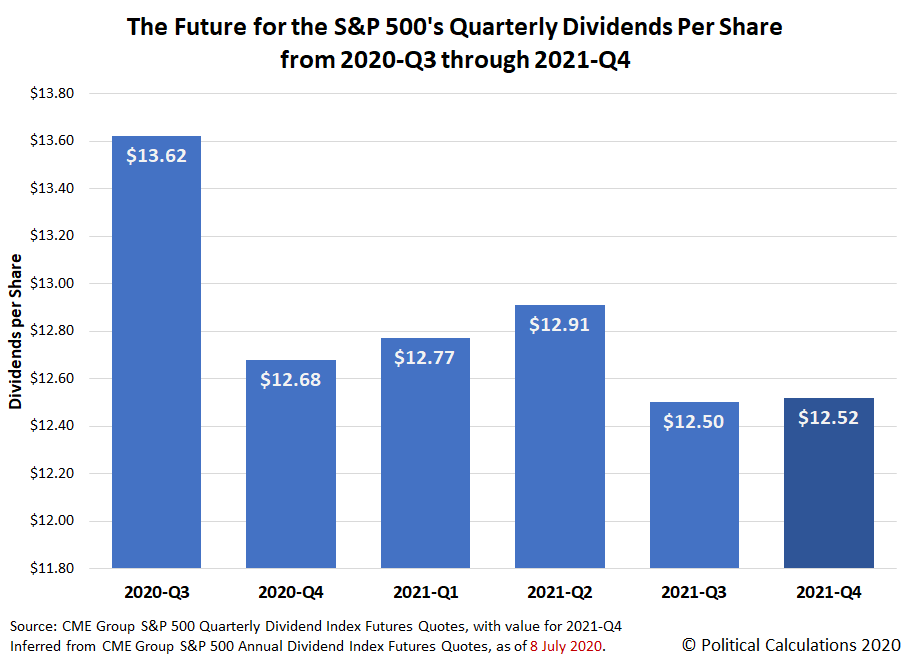 We've only become able to see through to the end of 2021 during the last two weeks. One important thing to know about these forecasts is that they correspond to dividends expected to be paid out by S&P 500 firms during the periods covered by futures contracts, which run from the end of the third Friday of the month preceding the indicated calendar quarter, through the third Friday of the month ending the indicated calendar quarter.

That makes them different from the quarterly dividends per share for the S&P 500 reported by Standard and Poor after the end of each quarter, which corresponds directly with the dividends that were paid out during the three months that make up a calendar quarter.

The U.S. Bureau of Labor Statistics released its Employment Situation report for March 2020 early today, the first monthly report since the coronavirus recession began in mid-March. Here's how it describes the change in non-farm employment since the BLS' February 2020 report:

Total nonfarm payroll employment fell by 701,000 in March, and the unemployment rate rose to 4.4 percent, the U.S. Bureau of Labor Statistics reported today. The changes in these measures reflect the effects of the coronavirus (COVID-19) and efforts to contain it. Employment in leisure and hospitality fell by 459,000, mainly in food services and drinking places. Notable declines also occurred in health care and social assistance, professional and business services, retail trade, and construction. 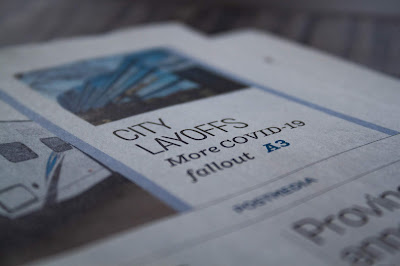 The data from this report was collected via the BLS' monthly survey of business establishments covering pay periods including 12 March 2020, and as such, represents a snapshot in time from just before President Trump declared a national emergency on 13 March 2020 and a week before state governors began ordering residents to stay-at-home and statewide business closures on 19 March 2020.

In the two weeks since then, the number of initial unemployment insurance claims has spiked sharply upward, breaking previous records, with 3.3 million filing new unemployment claims as of 26 March 2020 and another 6.6 million on 2 April 2020.

Those newly unemployed Americans will be showing up on the April 2020 employment situation report, but the bigger question begging to be answered is how high could U.S. unemployment rise in the coronavirus recession?

Back on 22 March 2020, St. Louis Federal Reserve Bank president Jim Bullard estimated the unemployment figure may hit 30% during the second quarter of 2020, but where does that number come from? After all, the unemployment rate in February 2020 was 3.5%, and that would be a huge change.

The St. Louis Fed's Miguel Faria-e-Castro worked through step-by-step how that back of the envelope estimate was calculated. In the following passage, we've added the links to the blog posts he references, other data he cites may be accessed via the Federal Reserve Economic Database (FRED):

That's useful back of the envelope math, so we've built the following tool to do it, where you may substitute the values to consider other scenarios, such as state level data or the data for other nations. If you're accessing this article on a site that republishes our RSS news feed, you may need to click through to our site to access a working version.

Running the tool with the default data, we can see where the St. Louis Fed gets its estimate of potential 32% unemployment. We should caution that this is a ballpark estimate of how high U.S. unemployment may grow, where the tool allows for more refined estimates of the impacted workforce as better information becomes available.

We've also generalized the descriptions for the affected workforce from Faria-e-Castro's description, which should make the tool more generally applicable than the specific scenario he considered.

Looking back at the employment situation in 2020-Q2, with roughly 10 million new unemployment claims filed in the last two weeks just as the quarter began, we are already nearly one fifth of the way to the St. Louis Fed's estimate of potential job losses from the coronavirus recession.