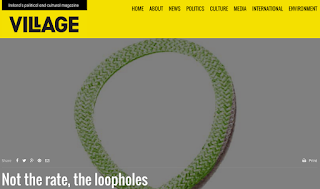 We have finally arrived: a Nobel Prize winner, former Chief Economist and Senior Vice-President of the World Bank (1997-2000) on Bloomberg, calling Apple's use of the Irish Tax Regime 'a fraud': http://www.bloomberg.com/news/articles/2016-07-28/stiglitz-calls-apple-s-profit-reporting-in-ireland-a-fraud?utm_content=business&utm_campaign=socialflow-organic&utm_source=twitter&utm_medium=social&cmpid%253D=socialflow-twitter-business.

This gotta be doing marvels to our reputation as a place for doing business and for trading into Europe and the U.S.

But do remember, officially, Ireland is not a tax haven, nor is there, officially, anything questionable going on anywhere here. Just 26.3 percent growth in GDP per annum, and booming corporate tax revenues that the Minister for Finance can't explain.

A new and well-worth watching documentary on the power of multinational companies in Ireland and Ireland's status as a corporate tax haven is available here: https://vimeo.com/137175562. 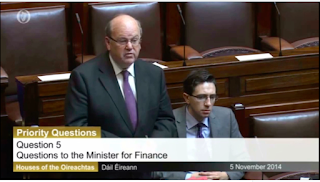 Note: Strangely enough, the documentary cites me as a Chairman of the IRBA (which I was at the time). It is worth repeating again that I never speak on behalf of any organisation I am involved with and the IRBA never had a corporate opinion on any policy-related issues. I only express my own personal views.

Recently, I covered the Pfizer-Allergan ‘merger’ just as Irish media navel gazed into the usual ‘jobs for Ireland’ slumber.  [You can trace much of it from here: http://trueeconomics.blogspot.ie/2015/11/201115-inversion-debate-isnt-over.html]

Now, few links that catch up with my analysis: 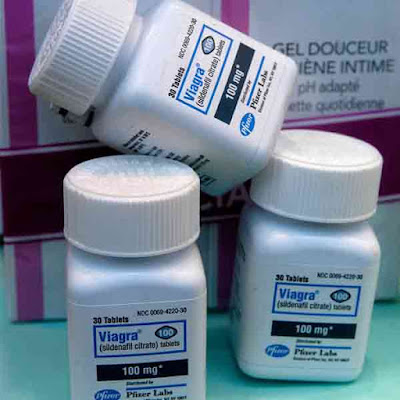 All of this would be gas were it not serious. Despite Irish Government promises to curb ‘harmful’ tax practices, despite our vocal ‘compliance’ with the spirit of the OECD ‘reforms’, Ireland remains a premier destination for tax inversions from the U.S. Worse, everyone now knows this, and no one is doing anything about it. Worse, yet, everyone is next going to be aware of the simple fact that no one is doing anything about it.

On a long enough timeline, things will be easier in the short run as Irish Exchequer milks the rest of the world for tax optimising commissions. In the long run… well, we might have to start looking into how we will pay all these future pensions when the penny finally does drop in Washington and Berlin…

On foot of couple previous posts relating to Ireland-bound pharma inversions, here is an interesting link to the Bloomberg coverage of the Allergen shenanigans: http://www.bloomberg.com/news/articles/2015-11-02/a-pharmacist-s-dirty-socks-are-key-to-cutting-pfizer-tax-bill

With a nice chart to accompany: 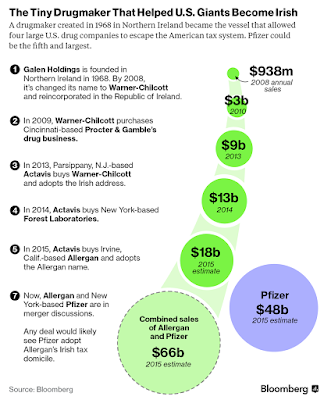 Couple of links to my previous posts on the topic, covering