Here is a set of summary tables for world's most impacted countries:

First, 17 countries with more than 7% of population tested positive:

And 16 countries with more than 0.15% of population dead:

Most are smaller in population countries. Outliers to this rule are:
The new wave starting means I should update the table for most impacted countries based on case counts alone. Prior to this week, I tracked countries with > 250,000 cases. There are now too many of these to make this table meaningful, so in days ahead, I will update the methodology to report countries with > 500,000 cases. Stay tuned.
Instead, here is the list of countries and regions with > 3 percent of total global cases:

Most of these are now starting a new wave of the pandemic.

In this update, let's take a look at the dynamics of the pandemic in BRIICS (Brazil, Russia, India, Indonesia, China and South Africa) group of countries.
First, weekly case counts: 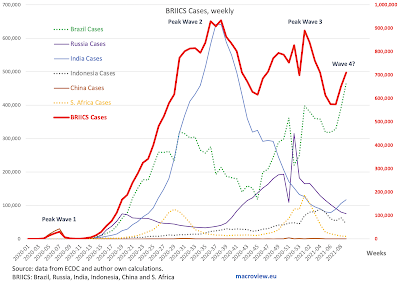 Brazil is leading BRIICS into what appears to be a new wave, Wave 4 of the pandemic. All other BRIICS countries are showing sustained moderation in new cases. There is also a much smaller uptick in new cases in India.
A similar picture emerges from weekly deaths data: 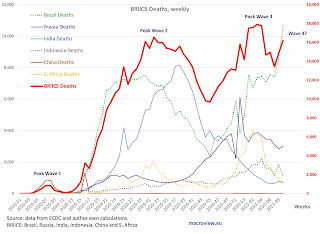 A summary table of per capita cases and deaths, as well as mortality rates.

One feature of the above dynamics is the state of uncertainty these highlight in the Emerging and Developing economies with respect to the recent improvements in the pandemic numbers. Sitting in the West, it is, perhaps (depending on the location) easy to slip into a state of overconfidence and complacency, as vaccines become more widely distributed and politicians trumpet the sight of 'normalcy' on the horizon. The problem with this worldview is three-fold:

In previous posts, I covered updates for Covid19 pandemic figures for: 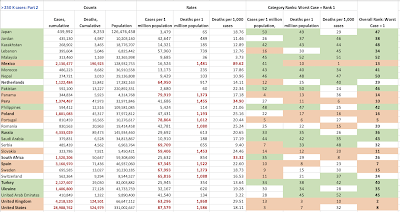 Two tables above summarize key statistics for the countries with more than 250,000 cases of Covid19 recorded. The table also provides overall rankings for these countries in terms of their performance across three metrics: cases per capita, deaths per capita and deaths per case.
Notably, ten worst countries based on these combined metrics are (once again, rank = 1 implies the worst overall performance):
Across major regions:

Note: in the above table, regions are ranked as countries, though countries' rankings do not include regions. Thus, if the EU27 was treated as a country, it would rank 19th worst in the list of countries. If we remove EU27 member states from the list, the EU27 itself would rank 9th worst in the list, just below the U.S. which continues to perform worse than the EU27, but only marginally.
Finally, countries' and groups' shares of deaths relative to their share of world population:

In previous posts, I covered the latest data for weekly Covid19 pandemic dynamics for: 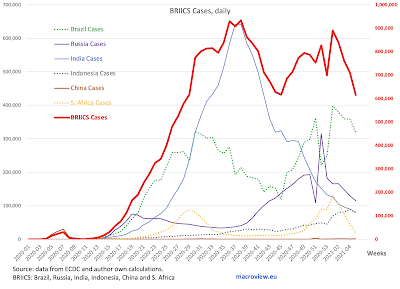 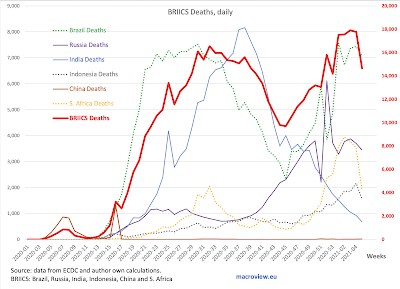 In broadly defined terms, there is an ongoing decline in both new cases and new deaths over the last week across all BRIICS. That said, it is too early to call the peaking of the second wave of this pandemic in terms of deaths counts, since weekly counts remain extremely high and show only one week of sustained declines. The good news is that last week's declines were evident in all BRIICS. Another good news is that we now have at least four consecutive weeks of declines in new cases across the entire group, except for Indonesia, where we only have one week of declines, and China.
A summary table: 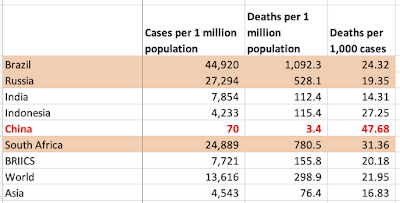 Here are some comparatives across all countries with the highest rates of detected infections (> 5% of population): 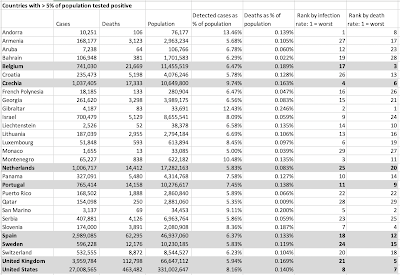 Another way of looking at this is to take countries with more than 250,000 confirmed cases, as presented in the next set of tables: 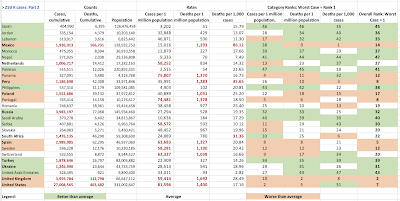 Comparing regions to the above countries:

And looking at the countries by population relatives: