I covered China Manufacturing PMI in an earlier separate note here: http://trueeconomics.blogspot.com/2016/02/31116-china-manufacturing-pmi-its-at.html with core conclusion that Chinese Manufacturing PMIs have been now running second worst in the BRIC’s group since July 2015, staying above only Brazil’s - a country that is in an outright recession. PMI index came in tat 48.4 in January, marginally up on 48.2 in December 2015, marking 11th consecutive month of sub-50 readings. 3mo average through January 2016 is now at 48.4 against 3mo average through October 2015 at 47.6. Current 3mo average is down significantly on 49.8 3mo average through January 2015. Last time Chinese Manufacturing posted statistically significant expansion (as measured by PMI reading above 51.46 - the statistically significant growth marker - was back in July 2014.

India Manufacturing PMI posted a rise to 51.1 in January from 49.1 in December, with January reading being highest in 4 months. This sounds like good news, expect it is not. The reason is that at 51.1, the PMI is well below historical average of 54.5. And it is below January 2015 level of 52.9. 3mo average through January 2016 is at zero growth mark 50.0, which compered poorly to 3mo average through October 2015 at 51.4 and worse relative to 53.6 which is 3mo average through January 2015. Market release was quite upbeat on India numbers, however, noting that “the industry recovered following the contraction seen at the end of last year. Alongside a resumption of output at some firms impacted by December’s flooding, manufacturers also benefited from rising inflows of new business from domestic and export clients.” The sectoral breakdown of the index is also concerning. Again per Markit, “The consumer goods subsector remained the principal growth engine at the start of the year, seeing substantial expansions of both output and new orders. In contrast, producers of investment goods saw output and new orders fall, while production volumes stagnated in the intermediate goods category.”

Russian PMIs were covered in a stand alone post here: http://trueeconomics.blogspot.com/2016/02/1216-russian-manufacturing-pmi-january.html with core conclusion that although Russia retained its's position as the second strongest performing economy by Manufacturing PMIs in the BRIC group in January, the latest reading puts Russian Manufacturing in a stagnation zone too close to 50.0 to call it a full-blown contraction. This has meant that over the last 3 months, Russian Manufacturing PMI averaged 49.7, a reading nominally below 50.0, although an improvement on 49.1 average for 3 months through October 2015, and on 49.4 3-mo average through January 2015. In simple terms, Russian Manufacturing continued to contract in 3 months through January 2016, but the rate of contraction was virtually indistinguishable from zero growth.


This leaves us to cover Brazil Manufacturing PMI. Brazil Manufacturing index posted a rise in January, hitting an 11-mo high of 47.4. By all normal metrics, this is a disaster territory reading, consistent with rather sharp deterioration in trading conditions. But for Brazil - this was an improvement, especially as output and news orders both were contracting at slower rates in January. Per Markit: “The downturn in the Brazilian manufacturing sector continued at the start of 2016, with levels of production and new orders contracting for the twelfth successive month. This continued to filter through to decisions relating to staff hiring, stock holdings and purchasing activity, all of which also declined during the latest survey month.”  On the positive (sort of) side, “output declined at weaker rates in each of the three production categories (consumer, intermediate and investment) covered by the survey. Underlying the latest decrease in output was a further reduction in the level of incoming new orders. The latest drop in inflows of new work received was mainly centred on the domestic market, as the volume of new export business expanded for the second straight month in January.” On a 3mo average basis, 3mo average through January 2016 is at 44.5, which is worse that 3mo average through October 2015 (45.6) and 3mo average through Ja
nuary 2015 (49.9). In simple terms, Brazil remains the basket case of BRIC economies, leading the group to the downside on Manufacturing.

Chart and table below summarise the BRIC’s outlook: 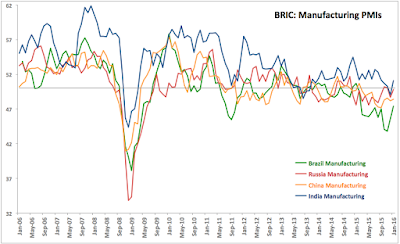 So, overall, BRIC Manufacturing side of the economy is still in a woeful shape. India's return to growth is relatively weak, while contractionary conditions prevail in Brazil (strong, albeit moderating on the end of 2015), Russia (very weak contraction, closer to stagnation) and China (where PMI data has been at serious odds with official national accounts data for some time now). The net result for the global growth is not exactly encouraging.

BRIC Manufacturing PMIs posted another sector-wide weakening in growth conditions in December, ending 2015 on foot of an outright contraction across the sector in all BRIC economies for the first time since late 2013.

Russian manufacturing PMI posted a deterioration in sector performance in December, falling to 48.7 from 50.1 in November. This reverses two consecutive months of above 50 readings in October and November. On a quarterly basis, 4Q 2015 average reading was 49.7, which is better than 48.4 average for 3Q 2015, but still below 50.0 line. Overall December reading was the weakest since August 2015 and signals that the much anticipated stabilisation of the Russian economy did not take place in December. More detailed analysis of Russian PMIs is available here for monthly data and here for quarterly data. Overall, Russia was the third weakest PMI performer in Manufacturing sector terms within the BRIC group.

Brazil’s Manufacturing PMI remained deeply below 50.0 mark in December, although rising to 45.6 from 43.8 in November. December reading stands as the highest in 3 months, but still signals sharp rate of activity contraction. 4Q 2015 average is at 44.5, which is down on 46.7 average for 3Q 2015. Brazil has now posted Manufacturing PMI readings below 50.0 for 11 months in a row, the longest such record in the group of BRIC countries. In addition, Brazil remained the weakest performer in terms of Manufacturing PMIs in the BRIC group.

Per Markit: “Brazilian manufacturing companies reported worsening operating conditions at the end of 2015. December saw output and new orders dip at rates that, although slower, remained sharp…Amid evidence of cashflow problems, stocks of purchases and post-production inventories both decreased at rates that were the quickest in over six years. …severe downturn in the sector that was evident among the three monitored market groups: consumer, intermediate and investment goods. …December data pointed to a further decline in incoming new work, the eleventh in as many months. …Panellists indicated that a deeper economic retreat and falling purchasing power among consumers had led domestic demand to dwindle. Conversely, new orders from abroad rose. The weaker real had reportedly supported firms in securing new business from external clients. That said, the overall pace of expansion was only marginal.”

China Manufacturing PMI fell from 48.6 in November to 48.2 in October, marking 10th consecutive month of sub-50 readings and the weakest reading in 3 months. On a quarterly basis, 4Q 2015 reading was 48.4 which is somewhat better than 47.4 reading for 3Q 2015, although still signifying overall contraction in the sector. By all metrics, Chinese Manufacturing PMI came in second weakest in the BRIC grouping after Brazil.

Per Markit: “Operating conditions faced by Chinese goods producers continued to deteriorate in December. Production declined for the seventh time in the past eight months, driven in part by a further fall in total new work. Data suggested that client demand was weak both at home and abroad, with new export business falling for the first time in three months in December. As a result, manufacturers continued to trim their staff numbers and reduce their purchasing activity in line with lower production requirements. Meanwhile, deflationary pressures persisted, as highlighted by further marked declines in both input costs and selling prices.” Overall, this was the first time exports orders fell since September 2015.

India Manufacturing PMI posted a moderate drop from 50.3 in November to 49.1 in December, putting PMI reading below 50.0 line for the first time since June 2015. However, on a quarterly average basis, 4Q 2015 came in at 50.0, signalling zero growth in the sector over the last quarter of 2015, down from relatively robust growth posted in 3Q 2015 (with PMI averaging 52.1). PMI averaged 51.7 in 2Q 2015. The data confirms my previously expressed view that India is now skirting dangerously close to a manufacturing recession and that overall economic growth conditions in the economy have deteriorated significantly compared to 2014.

Per Markit: “Indian manufacturers saw business conditions deteriorate at the end of 2015. December’s incessant rainfall in Chennai impacted heavily on the sector, with falling new work leading companies to scale back output at the sharpest pace since February 2009. On the price front, inflation rates of both input costs and output charges were at seven month highs. …Consumer goods bucked the sub-sector trend and was the only category to see improving business conditions in December as production and new orders rose. Conversely, incoming new work and output fell in both the intermediate and investment goods market groups. Having risen for 25 straight months, total
manufacturing production in India fell during December. Furthermore, the rate of contraction was the sharpest in almost seven years.”

And a chart to illustrate 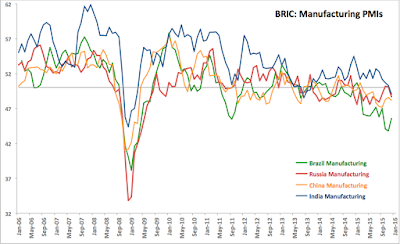 Hence, overall, as of December,


Overall, we now have all BRIC Manufacturing PMIs below 50 line for the first time since March 2009. This strongly shows overall continued downward pressures on growth in world’s largest emerging markets.
Having covered Russian Manufacturing PMIs earlier here. Now, let’s take a look at the Services PMI and Composite PMI next.

In a positive sign of some stabilisation in the economy in September, Services PMI came in at moderate growth reading of 51.3 - the highest reading since July 2015 and up on 49.1 in August.

According to Markit, there was an increase in new orders, although excess capacity persisted in September. Job cuts continued as well, on foot of reductions in backlog of work.

September reading signals fourth instance of growth over the last 6 months, which, in the past did not translate in de-acceleration in the rate of economic contraction, so the latest figure should be considered with caution when interpreting growth in the Services sector as a sign of economic stabilisation. We need several months of continued above 50 readings on both Manufacturing and Services PMIs side to call an economic turnaround. 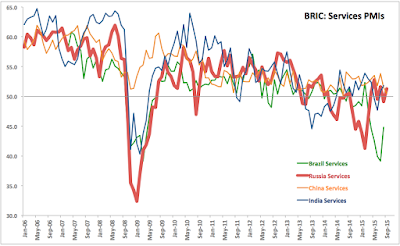 That said, given we are still awaiting for release of other BRIC data for Service, Russian Services sector performance in September is encouraging. China’s Services PMI came in at 50.5, below Russian PMI last month. The latest data for other BRIC economies shows Russia likely moving from third position in sector growth in August to second in September.

Boosted by Services improvement, Composite PMI for Russia posted a reading over 50 in September, coming in at 50.9 compared to 49.3 in August. This beats China’s 48 reading for September. 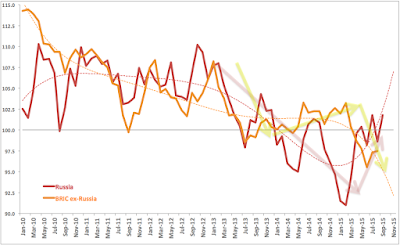 As chart above shows, Russian Composite PMI has been on an upward trend since February 2015 trough and is now in growth territory over three months for the last 6 months period. Again, this warrants only cautious optimism, however, as we are yet to have consecutive above 100 readings in the index.

Russia’s manufacturing PMI released by Markit showed slower rate of decline in the sector activity in September, rising to 49.1 from 47.9 in August. This is the highest reading in the series since February 2015, but marks 10th consecutive month of sub-50 readings.


Overall, Manufacturing PMI signal, in my view, is not yet consistent with expected stabilisation of the economy. Remember, I recently noted that previous hopes for economic recession bottoming out in 2Q 2015 have been squashed by the data, with new consensus outlook for stabilisation in 3Q. Based on the data to-date, this stabilisation did not take place. We are now looking at another quarter of below zero growth and most likely will see sub-zero GDP growth through 4Q 2015 as well. 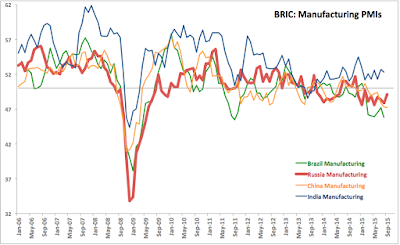 Note: I covered China Manufacturing, Services & Composite PMIs for September in an earlier note here http://trueeconomics.blogspot.ie/2015/10/11015-china-pmis-signalling-deeper.html. Overall, Russian Manufacturing PMI (and the exports component of the index especially) are broadly in line with Chinese data so far. 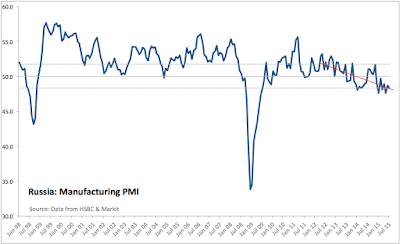 
Overall, the picture is consistent with two key trends that have developed over recent months: