What does it take to build a 57-story building in 19 days?

That's the equivalent of a building the size of New York City's famous Woolworth Building, which took three years to build over a century ago, and which was once the tallest building in the world. As you'll see in the following video of the construction of Changsha's J57 Building by China's Broad Sustainable Building Group, the secret is modular design and fabrication.

Some more notes on the advantages of this kind of construction technique from RealtyToday:

The Daily Mail notes that the developer of the project, Broad Sustainable Building, opted for a construction methodology that is not just innovative in itself, but is also very eco-friendly. Today, China has a growing concern over its air pollution problem.

The use of prefab materials that were manufactured in a separate factory off the site not just resulted to a quick process. It also paved the way for the avoidance of what was supposed to be 15,000 truckloads of cement to be hauled in to the site that could have brought forth an accumulation of unwanted dust particles in the air. The people behind the construction also used super thick glass, and made sure that the process is also sealed "99.9 percent tight".

We'll note that the other advantages of this kind of approach to introducing modern factory production methods to major construction projects like this will be higher levels of quality, because factory environments are much easier to control than outdoor construction sites.

Optimized to work with today's freight transportation systems, there's no reason that similar buildings couldn't start popping up in city skylines around the world and perhaps giving a whole new meaning to what we mean when we say that something was "Made in China".

Imagine this situation, if you will. You are trapped in a high rise building that is on fire. Smoke fills the air and oxygen is running low. If you want to live, you need to breathe and for that, you need a source of clean air.

That's why our featured invention today should intrigue you, because it offers an individual in that situation with a way to access fresh air until they might be rescued. William O. Holmes of Belmont, California came up with a unique and yes, patentable, solution for this scenario, as witnessed by his 1982 patent for a "Fresh-air breathing device and method". Most however will describe his invention as what it really is: the toilet snorkel.

Don't believe us? Here's Figures 1 and 5 from U.S. Patent 4,320,756 and Holmes' disclosure of the invention describing its utility: 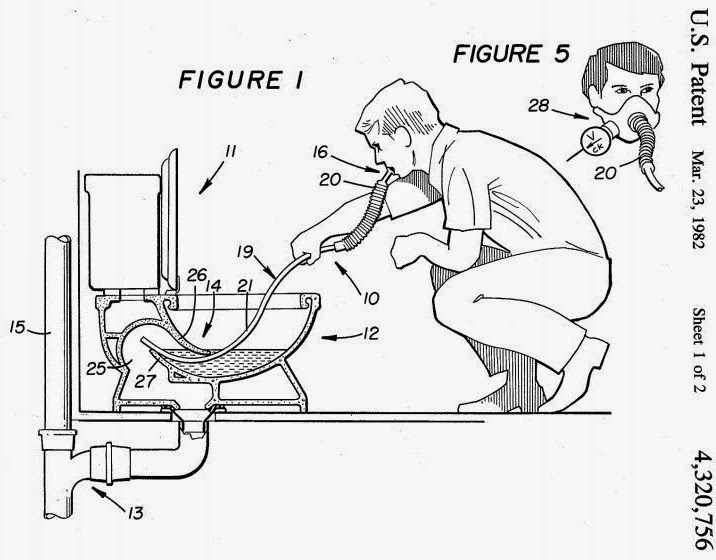 This invention provides an economical device and method for ensuring a life-saving supply of fresh air to a person entrapped in a burning hotel room or the like, when the person is subjected to toxic smoke inhalation.

The fresh-air breathing device comprises breathing means for being held in communication with a respiratory intake passage (mouth and/or nose) of the user and conduit means for communicating fresh air to such respiratory intake, including a first end connected to the breathing means and an open second end having sufficient flexibility and length for insertion through a water trap of a toilet. Carrying forth the method of this invention, such insertion of the conduit means or breathing tube through the water trap will expose the open end thereof to fresh air from a vent pipe connected to a sewer line of the toilet. The user may then proceed to breathe fresh air for life-saving purposes, until rescued.

We really like the facemask accessory for the invention as shown in Figure 5 above. Because if you're going to breathe in fresh air through a vent pipe connected to a sewer line of a toilet, you might as well do it in style!

As Jason Kottke describes it, realistic images of water was one of the "holy grails" for CGI. And now, it just takes 185 lines of JavaScript code to render the algorithmic sea.

In our age of electric power tools, is there any area left in the modern shop where an individual working with hand tools can outperform a machine tool?

Mostly, the answer is no. Today's power tools so greatly increase the productivity of those using them that it often doesn't make sense to drag out their hand tool predecessors. That's something you can certainly confirm for yourself if you ever took out an old-fashioned hand drill to drill a number of holes in a wood board instead of a modern battery-powered hand drill.

But not always. Core77 recently featured a story about Shannon Rogers, the Renaissance Woodworker, who found that in the hands of a skilled carpenter, a hand-powered frame saw invented in the 18th Century could outperform a modern day electricity-powered band saw in the task of resawing, which involves cutting a large board or post into thinner boards or sheets.

The following short video shows the frame saw in action.

Core77 describes how Rogers' hand-powered frame saw can beat the typical band saw found in virtually all of today's workworking shops in a battle of productivity:

With this saw Rogers has managed to cut veneer slices as thin as 1/8", and when cutting across 24 inches of wood, clocked himself at a cutting depth speed of one inch per minute. And when he tried doing boards of lesser width, he found this surprising fact: "I realize that my 14" bandsaw is pretty underpowered, but I know I can resaw a typical 6-8" wide board faster than it can. I have timed it and my hand method beat the bandsaw by 2 minutes on a 7×24 piece of old growth heart Pine for drawer sides. I’m not a super sawer, I chose the right tool for the job."

Now, here's where it gets really interesting. This 18th Century frame saw design would be capable of providing ordinary woodworkers with the ability to work with much larger pieces of lumber, which would put them on a much more advantageous and competitive footing with today's established large-scale woodworking shops that rely upon large mechanized and automated production equipment to perform the same tasks. Armed with the right tools, humans are not destined to become obsolete in a world of manufacturing otherwise trending in favor of greater levels of automation.

Shakespeare once wrote that what's past is prologue. In truth, sometimes it's more than that. Sometimes, what's rediscovered from the past that has been long lost becomes the future way of doing things.

Perhaps the only thing cooler that the JPL's image of the dwarf planet Ceres taken by the Dawn probe.... 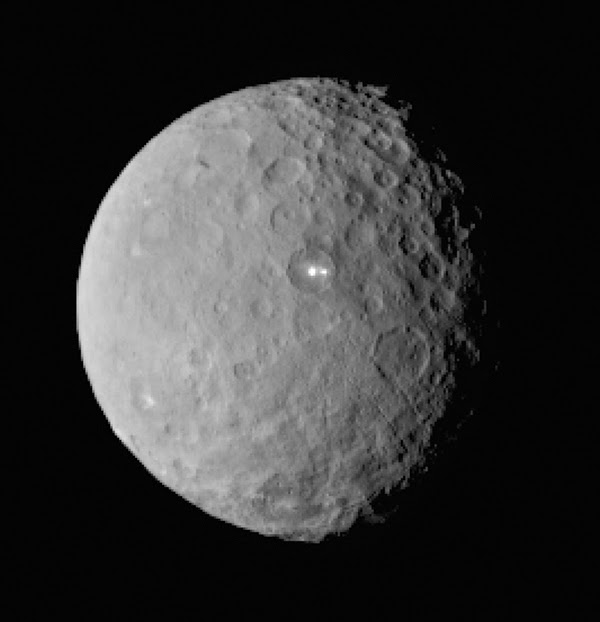 Would be if the folks at JPL had to finish Obi Wan Kenobi's "That's no moon..." quote.