Despite coming from banking, the concept of concentration risk applies to other organisations and sectors. For example, take suppliers of components to large companies, like Apple. For many of these suppliers, Apple represents the source of much of their revenues and, thus, they are exposed to the concentration risk. See this recent article for examples.

For sectors, as opposed to individual organisations, concentration risk relates to the distribution of sector earnings. And the latest FactSet report from April 7, 2017 shows just how concentrated the geographical distributions of earnings for S&P 500 are: 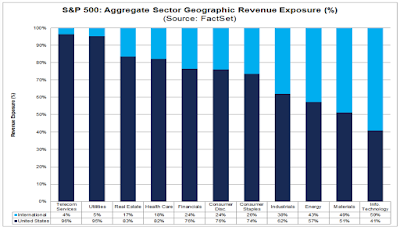 In simple terms, S&P 500 is extremely vulnerable to the fortunes of the U.S. economy. Or put differently, there is a woeful lack of economic / revenue sources diversification in the S&P 500 companies.