One of the challenges we've taken on this year is developing more real-time indicators of the health of the U.S. economy. One of the other challenges we've taken on is the determination of a consumption-based National Dividend - a concept for measuring the well-being of the people of a nation that was first proposed by Irving Fisher in 1906, but which couldn't be developed because it was too difficult to amass the consumption data needed to calculate it. At least, until we finally got our hands on the problem earlier this year!

The problem with making our national dividend calculation into a near-real time indicator of the economic health of the American people is once again the data. The Consumer Expenditure Survey that provides the data we need to calculate the national dividend is presented semi-annually. If we want to make it a near-real time indicator, we need that kind of data a lot more frequently.

That's where we realized that our observation that there is an almost perfect 1-to-1 correlation between a consumer unit's average annual consumption expenditures and the median household income would be an important discovery - we can use the monthly median household income data collected and published by Sentier Research as a reasonable substitute for monthly consumer expenditure data!

With that in mind, here's the nominal and inflation-adjusted median household income that has been reported by Sentier Research in each month since January 2000 through the most recent data available for March 2015: 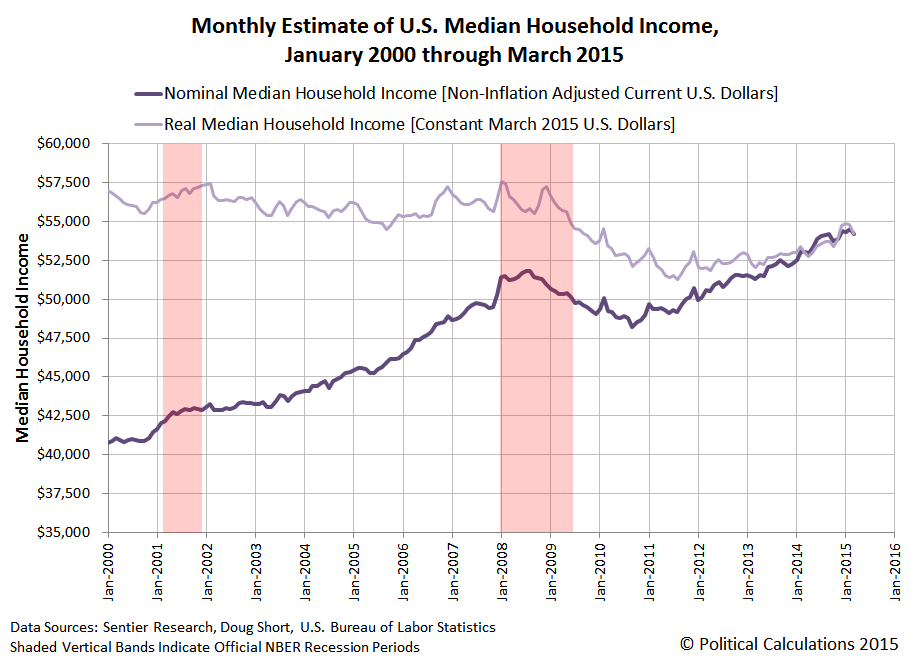 To reasonably estimate both the nominal and real national dividend then, we would just need to multiply the monthly values for these figures by the number of consumer units in the U.S. Only here, we took the data for July of each year that overlaps the annual Consumer Expenditure Survey reports so we could determine the correlation between the two. Given the once-a-decade data revisions in the Census Bureau's monthly household estimates however, it was more complicated that it sounds. The chart below reveals the correlation we found for each year, which we will apply to the appropriate monthly data to get a monthly estimate of the number of consumer units in the U.S. 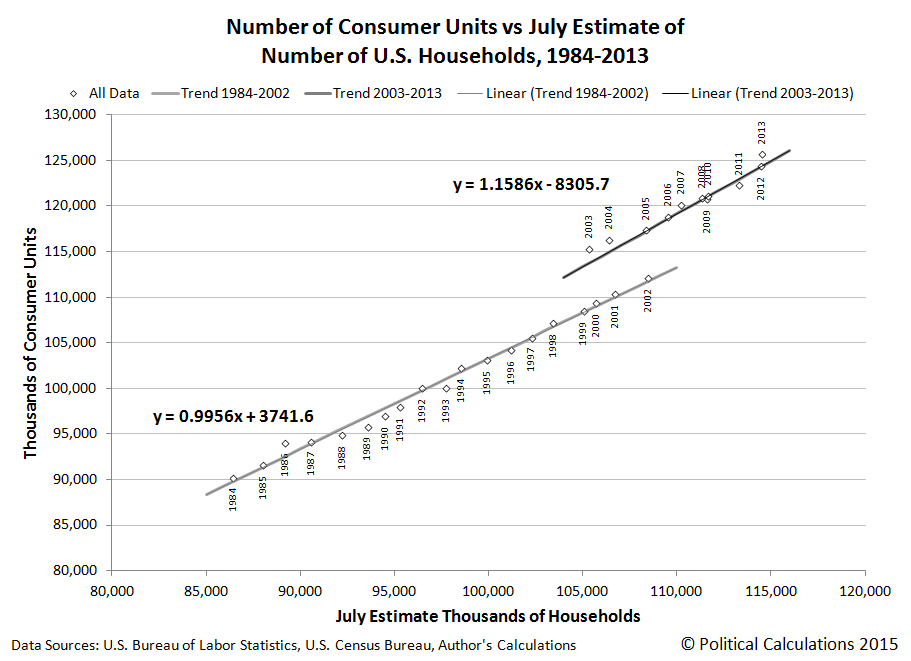 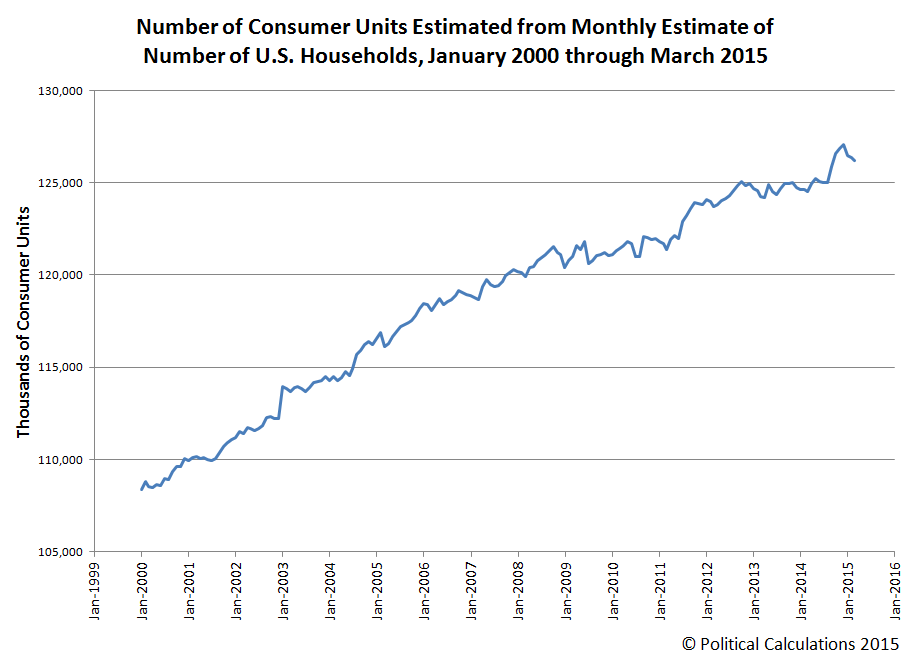 That was more work than it really needed to be, but now that we've done it, let's get to our results. The chart below shows our estimate of the nominal and real national dividend on a monthly basis since January 2000: 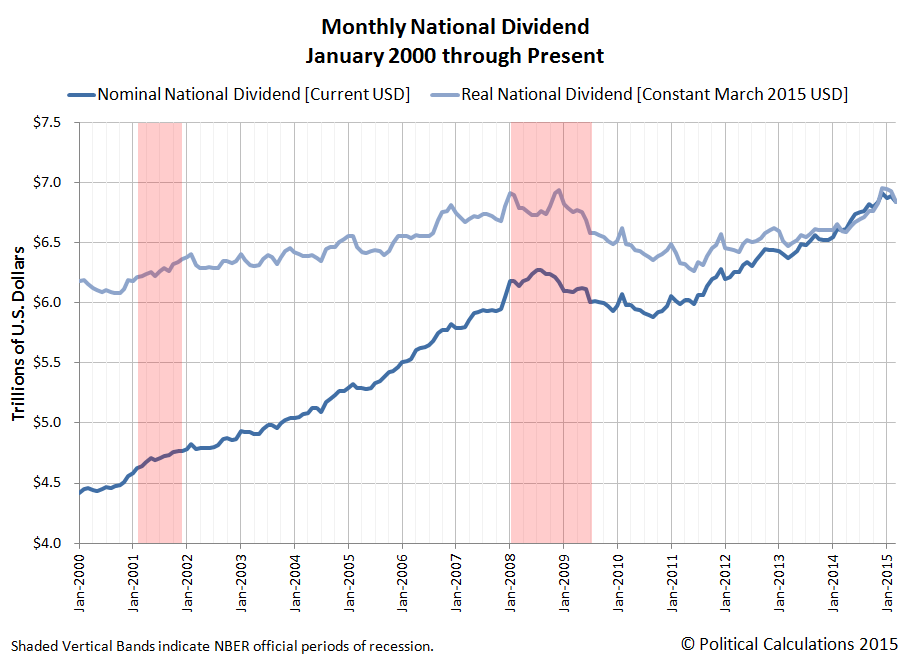 Here's what we observe in the data:

Looking at the most recent months, since December 2014, we see that our nominal and inflation-adjusted consumption-based measure of the economic well being of the ultimate end consumers in the U.S. has turned downward, which would so far appear to coincide with a period of greatly decelerated GDP growth, if not outright contraction. We'll get the official word on that for the first quarter of 2015 near the end of June, but our estimate of the national dividend certainly supports that outcome.

One thing that will be interesting to consider is if the impact of the Federal Reserve's various quantitative easing programs has had any effect upon the national dividend, which will be something that we'll explore in an upcoming post.

We'll conclude by repeating our previous observation that the national dividend has primarily risen since January 2000 because of the population of the U.S. increasing over time, or more accurately, because of the increase in the number of "consumer units" or households in the U.S., rather than real increases in the incomes earned by U.S. households.

Once upon a time, less than two months ago, we solved a problem that had stymied economists since 1906. And we made it look easy!

Also, a rough draft of this post appeared briefly on the morning of 12 May 2015 giving a sneak peak at what we've been working on developing, under the working title "The National Dividend Monthly", which sounded way too much like the name of some obscure magazine!

According to data published in December 2014 by the U.S. Bureau of Labor Statistics in its annual Highlights of Women's Earnings report, in 2013, women made up 48.2% of the total number of workers in the U.S. labor force and the average woman in the United States earned 76% of what the average man did.

But you don't have to take our word for it! Here's the data straight from Table 5 of the report for the number of workers by sex for each category of the usual number of hours worked each week:


And here's the corresponding data from the same table as it relates the median weekly earnings by the usual number of hours worked each week:

We thought it might be interesting to visualize all the data we've presented in table form above in a single chart. To do that, so we can show all the data with a single axis, we've calculated the percentage of all workers that are women along with the percentage of men's median weekly earnings that women earn for each category of usual hours worked per week. 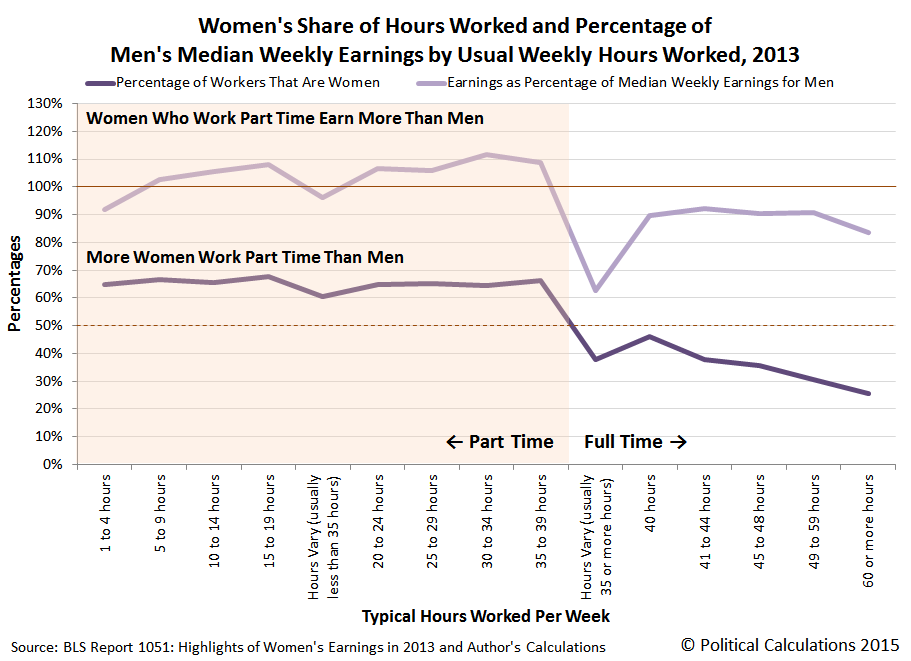 What we see is that the median U.S. woman is typically being paid a 10% premium to work part time compared to a U.S. man working the same number of hours each week. As you can imagine, that kind of financial incentive would go a very long way to explaining why two-thirds of all working Americans who work less than 40 hours per week are women.

But as the number of usual hours worked each week rises, we see that situation reverses. For people who regularly work 40 up to 59 hours per week, women earn about 90% of what a man working the same number of hours does. However, as the number of hours required to earn incomes rise, we also see that fewer and fewer women are to be found working. At the topmost end, we see that for people who work 60 or more hours per week, the median income earned by a woman drops to 84% of the median working earnings of a man who puts in those kinds of hours, and also that only 26% of the total number of people who spend more than half their waking hours per week working at income-paying jobs like this are women.

U.S. women would also appear to be highly averse to working variable numbers of hours each week, which we see in the dips for the percentage share of workers who work varying hours each week with respect to those who work a steady number of hours.

While it is the combination of all these factors that results in the median weekly earnings for American women being just 76% of those for men, we find that it is the relatively higher pay rewards of part time employment for women as compared to men and the relative absence of women who choose to work 60 or more hours at income-paying jobs each week that are the greatest contributors to that statistic.

Back in 2011, we did some back of the envelope math to estimate the degree to which big labor unions might be gouging their rank and file members. We went state by state in looking at how much "surplus" revenue that the local state branches of the National Education Association (NEA) or American Federation of Teachers (AFT) were collecting in member dues that might be considered to be far in excess of the amount actually needed to simply represent the interests of union members at their employers.

In doing that, we identified the states where Big Labor would appear to have stuck their greedy hands much too deeply in the pockets of their members in 2008 and 2009, finding a unique correlation with the partisan control of the state's legislatures in the process. Here's how we described our analytical results at the national and worst state levels:

We see that at the national level, where surplus member dues exceed 63% of the total member dues collected. Using our 25% threshold as the cap for "legitimate" union representation expenses, this suggests that the portion of teachers union dues that go to the national affiliate of the NEA could be reduced by 40% without impacting the ability of the teachers to have their interests effectively represented at this level.

The states whose education unions are most gouging their teachers members include Hawaii (with surplus member dues of 66% and 34% for the state's two NEA affiliates), California (54%), New Jersey (52.1%), Ohio (50.7%), Florida (42.0%), Nevada (41.6%), Massachusetts (37.6%) and Wisconsin (35.6%). At a minimum, teachers' union dues could be reduced by anywhere from 10% to 25% in these states without impacting the union affiliates ability to just represent the teachers at their employers.

Finally, we note a significant divergence between states with legislatures controlled by members of the Democratic party and those states whose legislatures are either controlled by the Republicans or are split between the two major U.S. political parties.

One of the main differences is that states with Republican legislatures are much more likely to institute "right to work" policies that prevent labor unions from being able to force employees in the state to join labor unions as a condition of employment, which stands in stark contrast to the restrictive policies instituted by state legislatures controlled by the Democratic party and its Big Labor fundraising organizations. The following chart tallies how differently "surplus" union dues collections were back in 2008 and 2009. 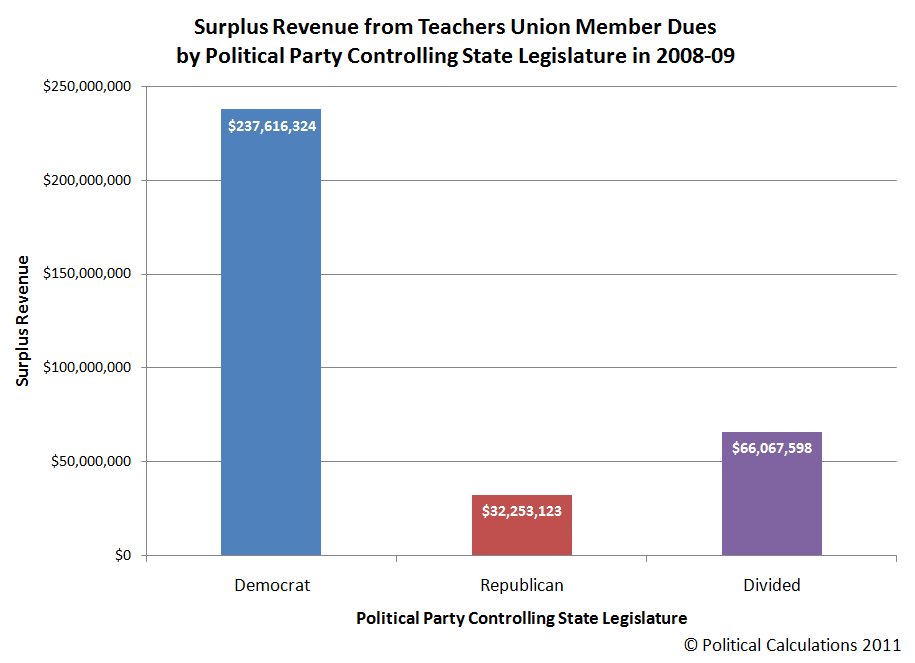 Flashing forward to today, we have a very interesting anecdote from the state of Wisconsin, where the Republican party-controlled state legislature just passed right to work legislation, in which labor unions, sensing their impending defeat, have already begun sharply reducing their membership dues in the face of plunging membership:

Unions representing teachers, professors, trash collectors and other government employees are struggling to stem plummeting membership rolls and retain relevance in the state where they got their start.

Here in King, Magnant and her fellow AFSCME members, workers at a local veterans home, have been knocking on doors on weekends to persuade former members to rejoin. Community college professors in Moraine Park, home to a technical college, are reducing dues from $59 to $36 each month. And those in Milwaukee are planing a campaign using videos and posters to highlight union principles. The theme: ­“Remember.”

The state branch of the National Education Association, once 100,000 strong, has seen its membership drop by a third. The American Federation of Teachers, which organized in the college system, saw a 50 percent decline. The 70,000-person membership in the state employees union has fallen by 70 percent.

Here, we have a clear example of a local branch of the NEA slashing their dues by $23 per month, a reduction of 39% from the excessively high dues they had previously imposed on their members. That reduction is right in line with our estimate of how much the state's big teachers unions were gouging their members of 35.6% back in 2008-09.

On a side note, we'll observe that a number of Big Labor organizations will cite the apparently lower wages earned by workers in "right to work" states as compared to other states as a reason to oppose instituting the laws that prevent them from imposing membership dues that gouge their members.

Here, we'll simply observe that such analysis is fatally flawed because it almost invariably fails to account for the relative cost of living in each state as well as their respective tax burdens. What matters more than basic income figures in measuring the relative well-being of people is the measure of what they can buy with their after-tax and after-labor-union-dues incomes in the places they live.

If Big Labor really wanted to do right by its remaining members, they would act to stop gouging them and slash the surplus portion of their dues by at least 75-90% in all non-right-to-work states and get out of the Democratic party fundraising business, which just hasn't worked out well for them since they made it their primary purpose in a sad bid to remain relevant.