Europe's debt addiction in one chart: the following chart plots total domestic and cross-border credit to non-banks, at constant end-Q2 2014 exchange rates, in per cent of GDP: 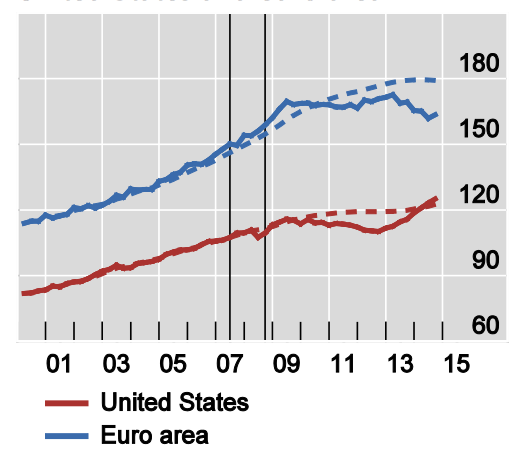 Two obvious conclusions emerge from the above:
Debt overhang and its impact on growth has been a rather controversial topic over the recent years. One of the key contributors to the debate is Kenneth Rogoff. Rogoff has a new paper out on the topic, together with Stephanie Lo, titled "Secular stagnation, debt overhang and other rationales for sluggish growth, six years on" published by the Bank for International Settlements (http://www.bis.org/publ/work482.pdf).

In the paper, Rogoff and Lo state that "there is considerable controversy over why sluggish economic growth persists across many advanced economies six years after the onset of the financial crisis. Theories include a secular deficiency in aggregate demand, slowing innovation, adverse demographics, lingering policy uncertainty, post-crisis political fractionalisation, debt overhang, insufficient fiscal stimulus, excessive financial regulation, and some mix of all of the above." Rogoff and Lo survey "the alternative viewpoints" on the causes of slow growth. The authors argue that "until significant pockets of private, external and public debt overhang further abate, the potential role of other headwinds to economic growth will be difficult to quantify."

Rogoff and Lo focus strongly on the effects of debt overhang on growth. "In our view, the leading candidate as an explanation for why growth has taken so long to normalise is that pockets of the global economy are still experiencing the typical sluggish aftermath of a financial crisis… The experience in advanced countries is certainly consistent with a great deal of evidence on leverage cycles, for example the empirical work of Schularick and Taylor (2012), who examine data for a cross-section of advanced countries going back to the late 1800s and find that the last half-century has brought an unprecedented era of financial vulnerability and potentially destabilising leverage cycles. Moreover, focusing on more recent events, Mian and Sufi’s (2014) estimates suggest that the effects of US household leverage might be large enough to explain the entire decline in both house prices and durable consumption."

Still, their conclusion is very cautious. Instead of assigning direct causality from debt to growth, they suggest increased indeterminacy of the relationship between other variables and growth in the presence of high debt overhangs. They do reinforce the point that the argument about debt overhang relates to the total real economic debt (governments, households and non-financial corporations), not solely to government debt alone.