Relaxation of the Covid19 pandemic restrictions is gaining momentum worldwide, with clusters of renewed concerns over the 'second peak' or 'second wave' dynamics. The problem is that global pandemic numbers remain extremely worrying:
Total new cases are hitting all-time highs: 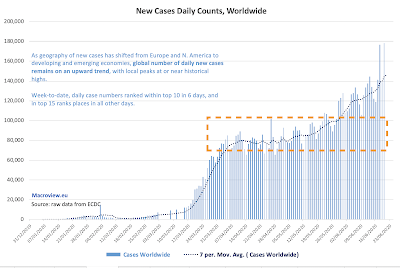 The orange box represents, roughly, the range of earlier data that triggered the lockdowns. It is clear that worldwide numbers are sustainably above that range. The 7-day running average is horrific and trending up at an accelerating rate. The slope of the current 7-day moving average is now similar to what we observed in the peak period of contagion in Europe.
Total daily deaths are also on the rise, once again: 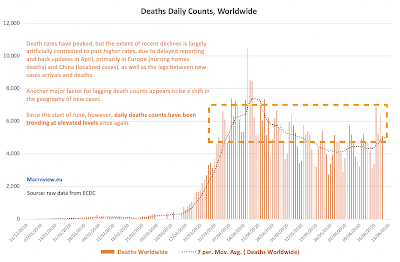 Once again, the orange box related current deaths to the European lockdowns initiation deaths. The 7-day moving average is on the rise, once again.
Yes, on per-capita basis, the pandemic has moderated, primarily due to different geographies of concentration of new cases and new deaths. However, European lockdowns periods coincided with more robust testing in Europe and in advanced economies in Asia, while current period of globally spiking cases and rising deaths is coincident with less robust public health systems in less developed countries, implying that current numbers are most likely coming from much larger underestimates of actual cases and deaths.

Having covered Manufacturing PMIs for 2Q 2020 for the BRIC economies here: https://trueeconomics.blogspot.com/2020/06/1620-3-months-of-covid19-impact-bric.html and Services PMIs here: https://trueeconomics.blogspot.com/2020/06/3620-bric-services-pmi-may-2020.html, time to update charts for Composite PMIs.
Brazil Composite PMI for 2Q 2020 is currently running at 27.3, the lowest on record, and marking a major decline on 46.9 reading in 1Q 2020. This implies that Brazil economy is currently registering sharply contractionary growth indicators in two consecutive quarters from the start of 2020.
Russia Composite PMI for 2Q 2020 currently stands at 24.5, also a historical low, marking second consecutive quarter of sub-50 readings. The last time Russian quarterly PMIs were statistically significantly below 50.0 was in 1Q and 2Q 2014.
India Composite PMI for 2Q 2020 is currently registering the sharpest downturn of all BRIC economies at 11.0, down from strongly expansionary 54.8 in 1Q 2020. This marks the sharpest fall-off on pre-COVID19 reading for any BRIC economy and signals that the Indian economy is effectively stoped functioning.
China is the only BRIC economy so far to show signs of post-pandemic recovery. China 2Q 2020 Composite PMI is currently running at 51.1 which is statistically above 50.0 marker, signalling weak, but positive expansion. Still, 51.1 marks the second slowest growth reading in the Chinese economy since 2Q 2016. 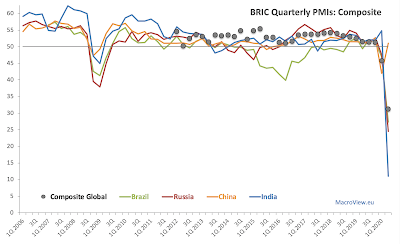 As the chart above indicates, Brazil, Russia and India all are currently running 2Q 2020 Composite PMIs below the Global Composite PMI (which is at 31.25 as of the end of May), while China Composite PMI is running well-ahead of the Global Composite PMI.
Services PMIs for BRIC economies are out today, so we can updated 2Q figures to include data for May. The latest monthly print imply slight moderation in the economic contraction in Brazil, India and Russia, with return to Services sector growth in China. This marks the first month since end of January with China posting positive growth in Services (reading of PMI above 50). 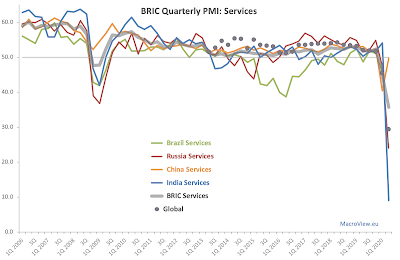 Brazil Services PMI was statistically unchanged in May at 27.6, compared to April 27.4 reading. Last time the Brazilian Services sectors posted PMI reading consistent with no contraction (at 50.4 - statistically zero growth) was back in February 2020. Current running average PMI for 2Q 2020 is at 27.5, marking the lowest reading on record.

Russia Services PMI was up from an absolutely disastrous 12.2 reading in April to a somewhat less disastrous reading of 35.9 in May. The index has been at at 37.1 in March. 2Q index reading so far is at 24.1, an absolute historical low, marking the second quarter in a row of sub-50 indicator readings, consistent with sharp contraction.

China Services PMI was the only BRIC Services indicator that managed to reach above 50 in May. May index at 55.0 was consistent with a major recovery momentum compared to 44.4 recorded in April. At 49.7, however, the 2Q figure is still outside positive growth territory.

Updating charts for COVID19 for Russia: 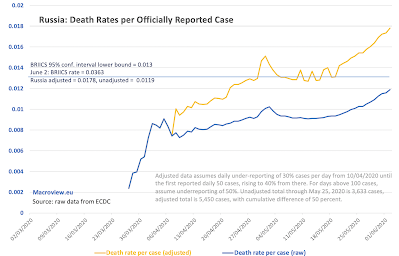 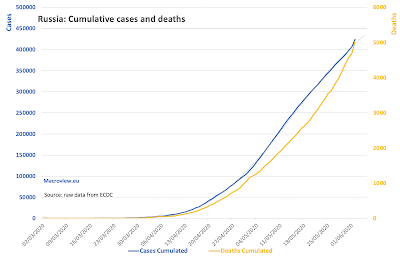 Noteworthy: Russia cases and death counts are now breaking out of the prior trend, both to the upside.

Updating my charts comparing EU27 to U.S. experiences in the pandemic: 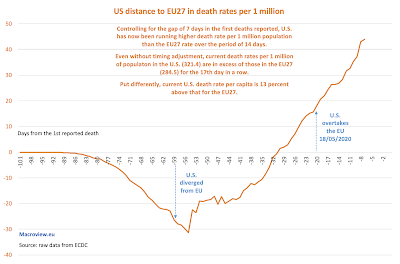 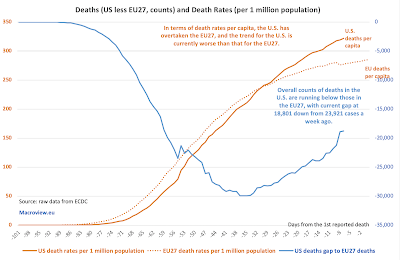 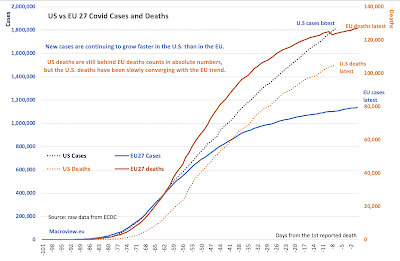