In a recent briefing note on the Capital Markets Union (CMU) (here: http://papers.ssrn.com/sol3/papers.cfm?abstract_id=2592918), I wrote that the core problem with private investment in the EU is not the lack of integrated or harmonised investment and debt markets, but the overhang of legacy (pre-crisis) debts.

Here is an interesting CEPR paper confirming the link between higher pre-crisis leverage of the firms and their greater propensity to cut back economic activity during the crisis. This one touches upon unemployment, but unemployment here is a proxy for production, which is, of course, a proxy for investment too.

In short, more debt/leverage was accumulated in the run up to the crisis, deeper were the supply cuts during the crisis. Again, nothing that existence of a 'genuine' capital markets union or pumping more credit supply (debt/leverage supply) into the system can correct.

In the previous post I shared my view of the QE. Here is the best, most succinct summary of the effectiveness of the 'most effective' of all recent QEs: the US example via @Convertbond: 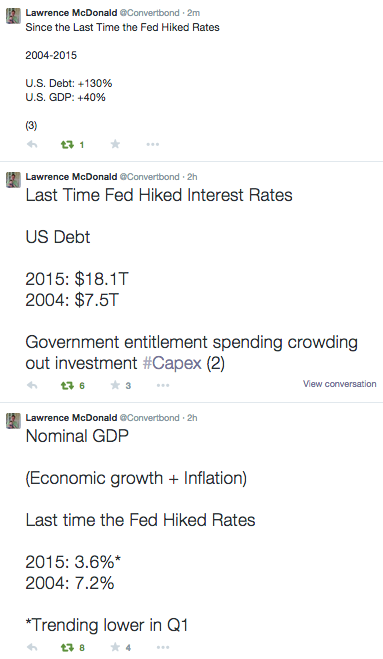 Nails it.
H/T to @RobinWigg for the following chart summing up Emerging Markets exposure to the USD-denominated corporate debt redemptions calls over 2015-2025. The peak at 2017 and 2018 and relatively high levels for exemptions coming up in 2016, 2019-2020 signal sizeable pressure on the EM corporates that coincides with expected tightening in the US interest rates cycle - a twin shock that is likely to have adverse impact on EMs' capex in years to come. With rolling over 2017-on debt becoming a more expensive proposition, given the USD FX rates and interest rates outlook, the EMs-based corporate sector will come under severe pressure to use organic revenue generation to redeem maturing debt. Which means less investment, less hiring and less growth.

The impossible monetary policy trilemma that I have been warning about for some years now is starting to play out, with delay on my expectations, but just as expected - in the weaker and more vulnerable markets first.
Ukraine package of funding from the IMF and other lenders remains still largely unspecified, but it is worth recapping what we do know and what we don't.

We have no idea as to the distribution of the USD22.5 billion across the individual EU states, but it is pretty safe to assume that countries like Greece won't be too keen contributing. Cyprus probably as well. Ireland, Portugal, Spain, Italy - all struggling with debts of their own also need this new 'commitment' like a hole in the head. Belgium might cheerfully pony up (with distinctly Belgian cheer that is genuinely overwhelming to those in Belgium). But what about the countries like the Baltics and those of the Southern EU? Does Bulgaria have spare hundreds of million floating around? Hungary clearly can't expect much of good will from Kiev, given its tango with Moscow, so it is not exactly likely to cheer on the funding plans… Who will? Austria and Germany and France, though France is never too keen on parting with cash, unless it gets more cash in return through some other doors. In Poland, farmers are protesting about EUR100 million that the country lent to Ukraine. Wait till they get the bill for their share of the USD22.5 billion coming due.

Recall that in April 2014, IMF has already provided USD17 billion to Ukraine and has paid up USD4.5 billion to-date. In addition, Ukraine received USD2 billion in credit guarantees (not even funds) from the US, EUR1.8 billion in funding from the EU and another EUR1.6 billion in pre-April loans from the same source. Germany sent bilateral EUR500 million and Poland sent EUR100 million, with Japan lending USD300 million.

Here's a kicker. With all this 'help' Ukrainian debt/GDP ratio is racing beyond sustainability bounds. Under pre-February 'deal' scenario, IMF expected Ukrainian debt to peak at USD109 billion in 2017. Now, with the new 'deal' we are looking at debt (assuming no write down in a major restructuring) reaching for USD149 billion through 2018 and continuing to head North from there.

An added problem is the exchange rate which determines both the debt/GDP ratio and the debt burden.

Charts below show the absolute level of external debt (in current USD billions) and the debt/GDP ratios under the new 'deal' as opposed to previous programme. The second chart also shows the effects of further devaluation in Hryvna against the USD on debt/GDP ratios. It is worth noting that the IMF current assumption on Hryvna/USD is for 2014 rate of 11.30 and for 2015 of 12.91. Both are utterly unrealistic, given where Hryvna is trading now - at close to 26 to USD. (Note, just for comparative purposes, if Ruble were to hit the rates of decline that Hryvna has experienced between January 2014 and now, it would be trading at RUB/USD87, not RUB/USD61.20. Yet, all of us heard in the mainstream media about Ruble crisis, but there is virtually no reporting of the Hryvna crisis). 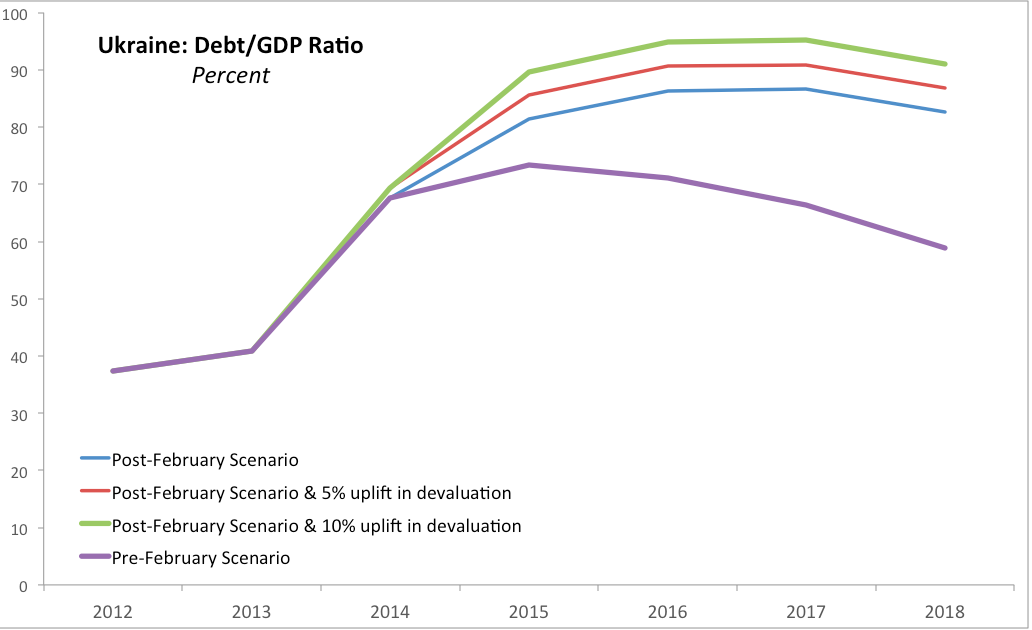 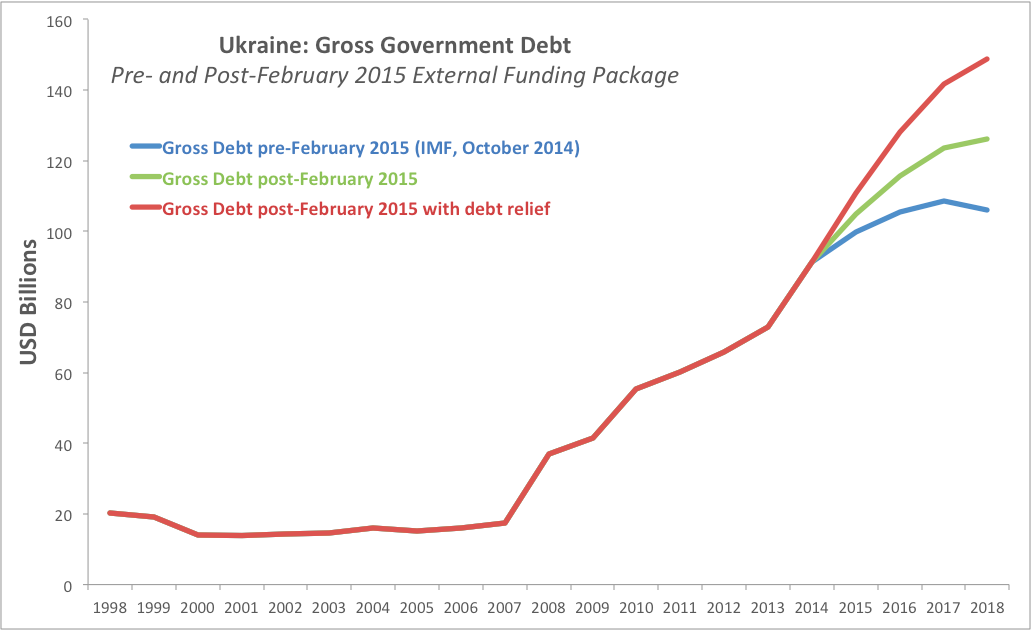 Now, keep in mind the latest macro figures from Ukraine are horrific.

Country Forex ratings are down at CCC- with negative outlook (S&P). These are a couple of months old. Still, no one in the rantings agencies is rushing to deal with any new data to revise these. Russia, for comparison, is rated BB+ with negative outlook and has been hammered by downgrades by the agencies seemingly racing to join that coveted 'Get Vlad!' club. Is kicking the Russian economy just a plat du jour when the agencies are trying to prove objectivity in analysis after all those ABS/MBS misfires of the last 15 years?

Also, note, the above debt figures, bad as they might be, are assuming that Ukraine's USD3 billion debt to Russia is repaid when it matures in September 2015. So far, Russia showed no indication it is willing to restructure this debt. But this debt alone is now (coupon attached) ca 50% of the entire Forex reserves held by Ukraine that amount to USD6.5 billion. Which means it will possibly have to be extended - raising the above debt profiles even higher. Or IMF dosh will have to go to pay it down. Assuming there is IMF dosh… September is a far, far away.

Meanwhile, you never hear much about Ukrainian external debt redemptions (aside from Government ones), while Russian debt redemptions (backed by ca USD370 billion worth of reserves) are at the forefront of the 'default' rumour mill. Ukrainian official forex reserves shrunk by roughly 62% in 14 months from January 2014. Russian ones are down 28.3% over the same period. But, you read of a reserves crisis in Russia, whilst you never hear much about the reserves crisis in Ukraine.

Inflation is now hitting 28.5% in January - double the Russian rate. And that is before full increases in energy prices are factored in per IMF 'reforms'. Ukraine, so far has gone through roughly 1/5 to 1/4 of these in 2014. More to come.

The point of the above comparatives between Russian and Ukrainian economies is not to argue that Russia is in an easy spot (it is not - there are structural and crisis-linked problems all over the shop), nor to argue that Ukrainian situation is somehow altering the geopolitical crisis developments in favour of Russia (it does not: Ukraine needs peace and respect for its territorial integrity and democracy, with or without economic reforms). The point is that the situation in the Ukrainian economy is so grave, that lending Kiev money cannot be an answer to the problems of stabilising the economy and getting economic recovery on a sustainable footing.

With all of this, the IMF 'plan' begs two questions:


Note: here is the debt/GDP chart adjusting for the latest current and forward (12 months) exchange rates under the same scenarios as above, as opposed to the IMF dreamt up 2014 and 2015 estimates from back October 2014: 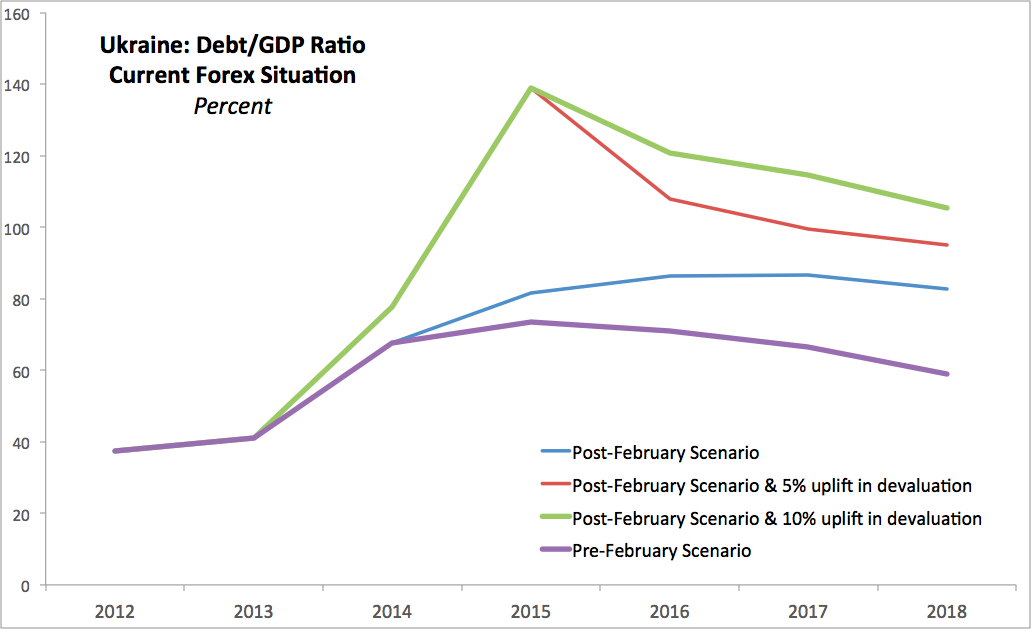 Do note in the above - declines in debt/GDP ratio in 2016-2018 are simply a technical carry over from the IMF assumptions on growth and exchange rates. Not a 'hard' forecast.
My post for Learn Signal blog on the issues of debt v equity composition of the global financial markets: http://blog.learnsignal.com/?p=157